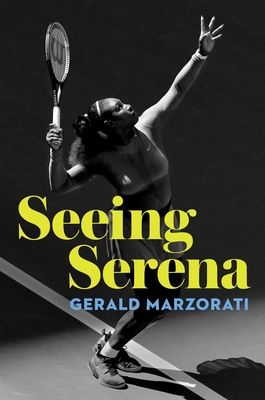 
Not Currently On Our Shelves. Usually Ships in 1-5 Days
A riveting, revealing portrait of tennis champion and global icon Serena Williams that combines biography, cultural criticism, and sports writing to offer “a deep, satisfying meditation” (The New York Times) on the most consequential athlete of her time.

There has never been an athlete like Serena Williams. She has dominated women’s tennis for two decades, changed the way the game is played, and—by inspiring Naomi Osaka, Coco Gauff, and others—changed, too, the racial makeup of the pro game. But Williams’s influence has not been confined to the tennis court. As a powerful Black woman who struggled to achieve and sustain success, she has emerged as a cultural icon, figuring in conversations about body image, working mothers, and more.

Seeing Serena chronicles Williams’s return to tennis after giving birth to her daughter—from her controversial 2018 US Open final against Naomi Osaka through a 2020 season that unfolded against a backdrop of a pandemic and protests over the killing of Black men and women by the police. Gerald Marzorati, who writes about tennis for The New Yorker, travels to Wimbledon and to Compton, California, where Serena and her sister Venus learned to play. He talks with former women’s tennis greats, sports and cultural commentators—and Serena herself. He observes Williams from courtside, on the red carpet, in fashion magazines, on social media. He sees her and writes about her prismatically—reflecting on her many, many facets.

The result is an “enlightening…keen analysis” (The Washington Post) and energetic narrative that illuminates Serena’s singular status as the greatest women’s tennis player of all time and a Black woman with a global presence like no other.
Gerald Marzorati is the author of Late to the Ball, a memoir about becoming a serious tennis player later in life. He writes regularly about tennis for The New Yorker. He was the editor of The New York Times Magazine from 2003 to 2010. He previously worked as an editor at the Soho News, Harper’s Magazine, and The New Yorker. His writing has appeared in The New York Times and many other publications. His first book, A Painter of Darkness, won the PEN/Martha Albrand award for a first book of nonfiction.
“Thoughtful. . . . Marzorati has written a deep, satisfying meditation on Serena’s path.” —The New York Times

“What would a year spent watch­ing every Serena Williams tennis match yield? A portrait both on and off the court of one of the greatest ath­letes of all time. New Yorker tennis writer Gerald Marzorati’s Seeing Serena captures Williams’ return to tennis follow­ing the birth of her daughter and her influence and presence as a cultural icon.” —Parade, “Books We Love” column

"With just enough backstory and supportive interviews, [Marzorati] effectively incorporates relevant history of Williams' previous Grand Slam tournaments while also examining her roles in challenging cultural norms and fighting for gender equality. Marzorati has an easy-to-read style and reveals the complexity of Williams' life, not just as an athlete, but also as a celebrity." —Booklist

“Readers who know more about Williams than her tennis career will learn about the game's intricacies while those already familiar with the game will benefit from subtler details.” —Kirkus Reviews

"The level of this analysis is quite impressive.” —Library Journal

"Well written. . . . This is a solidly reported book." —Publishers Weekly

“Seeing Serena is a masterful, multifocal portrait of an icon at the height of her power. But it is more than that. It illuminates, and complicates, not only Williams, but also those who watch her.” —Louisa Thomas, author of Louisa: The Extraordinary Life of Mrs. Adams