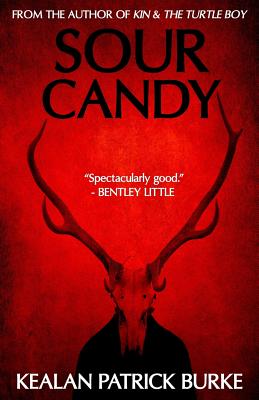 At first glance, Phil Pendleton and his son Adam are just an ordinary father and son, no different from any other. They take walks in the park together, visit county fairs, museums, and zoos, and eat overlooking the lake. Some might say the father is a little too accommodating given the lack of discipline when the child loses his temper in public. Some might say he spoils his son by allowing him to set his own bedtimes and eat candy whenever he wants. Some might say that such leniency is starting to take its toll on the father, given how his health has declined. What no one knows is that Phil is a prisoner, and that up until a few weeks ago and a chance encounter at a grocery store, he had never seen the child before in his life. A new novella from the Bram Stoker Award-winning author of THE TURTLE BOY and KIN.

Born and raised in a small harbor town in the south of Ireland, Kealan Patrick Burke knew from a very early age that he was going to be a horror writer. The combination of an ancient locale, a horror-loving mother, and a family full of storytellers, made it inevitable that he would end up telling stories for a living. Since those formative years, he has written five novels, over a hundred short stories, six collections, and edited four acclaimed anthologies. In 2004, he was honored with the Bram Stoker Award for his novella The Turtle Boy. Kealan has worked as a waiter, a drama teacher, a mapmaker, a security guard, an assembly-line worker at Apple Computers, a salesman (for a day), a bartender, landscape gardener, vocalist in a grunge band, curriculum content editor, fiction editor at Gothic.net, associate editor at Subterranean magazine, and, most recently, a fraud investigator. When not writing, Kealan designs book covers through his company Elderlemon Design. A number of his books have been optioned for film. Visit him on the web at www.kealanpatrickburke.com