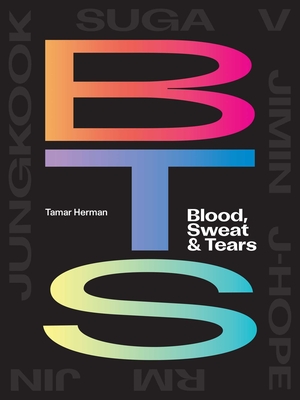 
This book may be available, use the button below to request more information from our team.
A beautifully illustrated exploration of the music, inspiration and cultural influence of BTS – K-pop’s global superstars!

“The Beatles for the 21st Century” – BBC

BTS have exploded onto the global music scene with their distinctive brand of music, impressive choreography, and socially conscious lyrics. With multiple chart-topping albums and record-breaking music videos under their belts, these seven-men—RM, Suga, J-Hope, Jin, V, Jimin, and Jungkook—are an unstoppable force and an international phenomenon.

In Blood, Sweat & Tears, K-pop columnist Tamar Herman explores the group’s origins, meteoric rise, wide-ranging activism, and close-knit relationship with their fans. With full color photos, spotlights on each member, and a play-by-play of their discography, this book is a celebration of all things BTS and a must-have for fans worldwide!
Tamar Herman is a New York City-based journalist specializing in international music and media with a focus on the Asian pop culture market and its trends. In addition to her role as pop correspondent at Billboard, she has written for outlets including NBC News, Forbes, and Entertainment Weekly, and appears in the “K-pop” episode of Vox's Explained docuseries on Netflix. She serves as the managing editor of K-pop blog KultScene, and is a co-host of the Nice Jewish Fangirls podcast.