The History of Democracy Has Yet to Be Written (Hardcover) 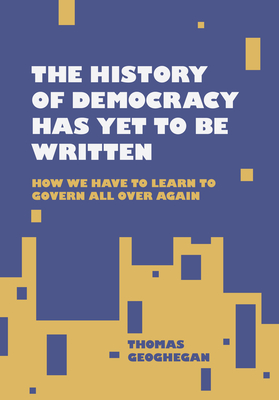 The History of Democracy Has Yet to Be Written (Hardcover)

"This book made me laugh out loud and also gave me glimpses of an entire horizon of possibility I hadn't seen before."--Chris Hayes, host of MSNBC's All In with Chris Hayes

End the filibuster. Abolish the Senate. Make everyone vote. Only if we do this (and then some), says Thomas Geoghegan, might we heal our fractured democracy.

In 2008, Geoghegan―then an established labor lawyer and prolific writer―embarked on a campaign to represent Chicago's Fifth District in Congress, in a special election called when Rahm Emanuel stepped down to serve as President Barack Obama's chief of staff. For ninety days leading up to the election, Geoghegan, a political neophyte at age sixty, knocked on doors, shook hands at train stations, and made fundraising calls. On election night he lost, badly.

But this humbling experience helped him develop a framework for reimagining American government in a way that is truly just, fair, and constitutional. Taking its title from Walt Whitman, The History of Democracy Is Yet to Be Written: How We Have to Learn to Govern All Over Again, combines hilarious tales from his time on the campaign trail with an incisive vision of how we might be able to create an America that fulfills its great promise. In a polarized country, where 100 million citizens don't vote, and those who do are otherwise rarely politically engaged, he makes an impassioned case for the possibility of a truly representative democracy, one built on the ideals of the House of Representatives, the true chamber of the people, and inspired by the poet who gives the book its name.

At once an engaging memoir and a call to arms, The History of Democracy Is Yet to Be Written will inspire and invigorate political veterans and young activists alike.

Thomas H. Geoghegan is a Chicago lawyer and author. He is a graduate of Harvard Law School (1975) and Harvard College (1971). He is president of the law firm Despres, Schwartz and Geoghegan, Ltd., which engages in labor, civil rights, and public interest litigation. His most recent book, Only One Thing Can Save Us: Why America Needs a New Kind of Labor Movement, was published by New Press in December 2014. He is also the author of Which Side Are You On? Trying to Be for Labor When It's Flat on Its Back (also from New Press), which was nominated in 1991 as one of the five best nonfiction works by the National Book Critics Circle. He has written four other books, and his articles have appeared in The Nation, The Baffler, Harpers, The New York Times, The New Republic, and other publication