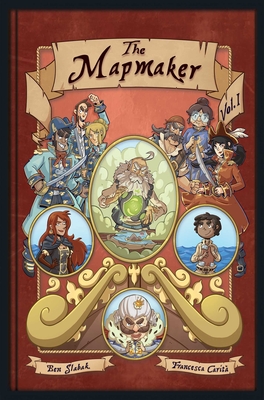 
On Our Shelves Now
The Mapmaker is an all-ages, fantasy adventure comic book series set on a parallel Earth during the Age of Discovery, written by Ben Slabak and illustrated by Francesca Carità, published by Scout Comics.

Imagine a parallel Earth during The Age of Discovery. Imagine Pirates of the Caribbean where the prize is a fantastical power wielded by a mysterious individual known simply as “The Mapmaker”. Any map he creates comes to life, a power highly desired by King Gus, who will stop at nothing to obtain it. The crew of the privateer ship The Rogue Wave, captained by the courageous Lei Li, are the only ones standing in their way with a mission to deliver the Mapmaker’s successor before his power wanes and is lost forever.

A fun fantasy adventure tale for all ages!
Ben Slabak is a writer/creator based in Sydney, Australia. Since 2014 he has written several original comic book series and graphic novels, including the hit six-issue sci-fi series Exilium published by Alterna Comics. The collected Exilium graphic novel has since gone on to become Australia's all-time highest crowdfunded graphic novel.  Scout Comics is publishing two new titles by Ben, The Mapmaker, and Mechanix.  Both titles are part of Scout's all-ages imprint, Scoot!.