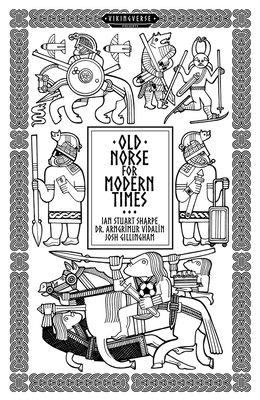 Never be lost for words again...with this book of lost words. Have you ever wanted to wield the silver tongue of Loki, or to hammer home your point like a Thundergod? Old Norse is the language of legends and the stuff of sagas, the inspiration for Tolkien and Marvel, for award-winning manga and epic videogames. It is the language of cleverly crafted kennings, blood-curdling curses, and pithy retorts to Ragnarök. Old Norse for Modern Times gives you the perfect phrase for every contemporary situation—from memorable movie quotes ("We’re going to need a bigger boat." Þurfa munu vér skip stærra) to battle-cries to yell on Discord ("Do I look to be in a gaming mood?" Sýnisk þér ek vera í skapi til leika?), from mead hall musings ("This drink, I like it! ANOTHER!" Líkar mér drykkr þessi! ANNAN!) to tried-and-tested pickup lines ("Nice tattoo!" Fagrt er húðflúrið"). With over 500 phrases inside (plus the chance to add your own!) it is the perfect guide for Vikings fans, whether they are re-enactors, role-players, or simply in love with Ragnar.
Ian Stuart Sharpe likes to imagine he is descended from Guðrum, King of the East Angles, although DNA tests and a deep disdain for camping suggest otherwise. He is the author of two novels set in his alternate Vikingverse, The All Father Paradox and Loki’s Wager. As a child he discovered his love of books, sci-fi and sagas: devouring the works of Douglas Adams, J.R.R. Tolkien, Terry Pratchett and George MacDonald Fraser alongside Snorri Sturluson and Sigvat the Skald. He once won a prize at school for Outstanding Progress and chose a dictionary as his reward, secretly wishing it had  been an Old Norse phrasebook. It took him thirty years, but he has finally realized his dream.