Despite Destruction, Misery and Privations...: The Polish Army in Prussia During the War Against Sweden 1626-1629 (Century of the Soldier) (Paperback) 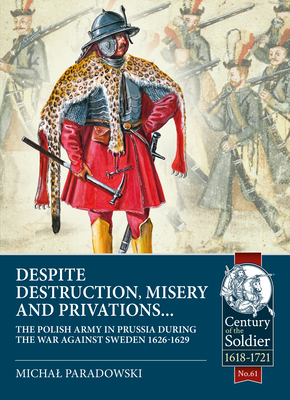 Despite Destruction, Misery and Privations...: The Polish Army in Prussia During the War Against Sweden 1626-1629 (Century of the Soldier) (Paperback)


Backordered, maybe unavailable. Email or call for more details.
Before he entered Germany in 1630, Swedish King Gustav II Adolf had to face Polish army in Prussia. Between 1626 and 1629, under command of brilliant Hetman Stanislaw Koniecpolski, Poles were engaged in bitter struggle against Swedes. During this conflict both sides learnt a lot from each other, adjusting their armies' organization and tactics. While pitched battles, where winged hussars could win the day, were rare, so called 'small war' made huge impact on the events of this conflict. Poles were able to hone their skills acquired during years of fighting Tatars and Turks but were also forced to vastly increase presence of the infantry in their army, adapting to new style of warfare. This book provides readers with in-depth study of the Polish troops during the war, from unique structure of the army, through organization and equipment of the units, to soldiers' daily struggle due to lack of pay and food. Each formation is described in detail, from famous winged hussars to Western European mercenaries serving as infantry and dragoons. The author's research is based on many Polish primary sources, that for the first time are available to English-speaking readers, presenting many interesting facts about less known conflict.