On Location: A Guide to Visiting the UK and Ireland's Best Film and TV Sights (Paperback) 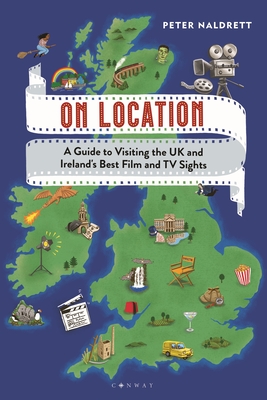 On Location: A Guide to Visiting the UK and Ireland's Best Film and TV Sights (Paperback)

Explore the many sights, locations, towns and cities up and down the country that have inspired and hosted popular films and TV programmes

For popular-culture vultures, there really is no better guide to Britain's best TV and film locations than On Location. Explore the cities, towns, historical sights, stately homes, studios, beaches, moors and parks that inspired and hosted films such as Harry Potter, 28 Days Later, Trainspotting and Batman Begins, and TV programmes such as Poldark, The Crown, Dr Who and Game of Thrones, to name just a few.

Wander the corridors of Highclere Castle, where Downton Abbey was filmed; gaze across Glen Etive in the Highlands of Scotland, an eerie and atmospheric location seen in the James Bond film, Skyfall; escape on the Hogwarts Express, aka the Jacobite Steam Train, across Glenfinnan Viaduct, as seen in the Harry Potter films: storm through the gates of Castle Ward in Northern Ireland, the location of Winterfell in Game of Thrones; and experience a feast for the senses amongst the dreamlike candy-coloured houses of Portmeirion Village, setting of The Prisoner, plus so many more sights to please all ages.

Handy maps and beautiful colour photography complete this fascinating guidebook that covers over 100 different locations, so you're never far from one whether you're on holiday and on a mission to see as many as you can, or simply fancy an interesting afternoon or day out not far from home that will both thrill the kids and captivate the grown-ups.

Peter Naldrett is a freelance writer specialising in travel and the outdoors. He has written a number of guidebooks as well as four books in the Dog Walkers' Guide series. He has also written for magazines such as Geographical, The Big Issue and Dalesman as well as The Daily Telegraph. He is the author of Days Out Underground, Around the Coast in 80 Days, and Treasured Islands, all published by Bloomsbury. When not writing and travelling, Peter teaches geography at a South Yorkshire secondary school.