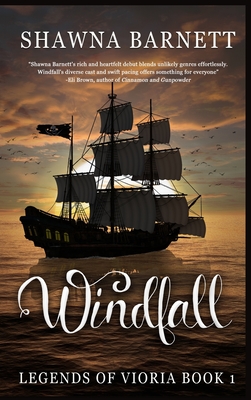 Captain Liana Foley knows a thing or two about fights. She fights the King's Navy. She fights to balance power in oppressive Vioria. She fights for respect as a female, bisexual, pirate captain. But she's losing her biggest fight: to escape her secret past as a lost Princess.

With a mysterious letter and a stranger threatening to expose her, Liana is blackmailed into attending a royal ball and protecting her counterpart, sheltered Princess Rhian. The pretenses are suspicious enough, but Liana takes the risk in hopes to finally unveil the magic plot that killed her parents and forced her into hiding.

When Liana encounters Rhian's own lightning-wielding powers, the ball erupts in violence. The sheltered princess falls into the care of Liana-and her band of pirates. On the run, the only safe haven for the Windfall crew to hide is the most-dangerous place of all: under the thumb of Liana's narcissistic, abusive brother-in-law.

In order to protect her crew, her family, and na ve Rhian, Liana must demand sacrifices from herself and the people she loves. Her choices will make powerful enemies; good thing Liana Foley knows a thing or two about fighting those.