The Citadel of Awareness: A Commentary on Jigme Lingpa's Dzogchen Aspiration Prayer (Paperback) 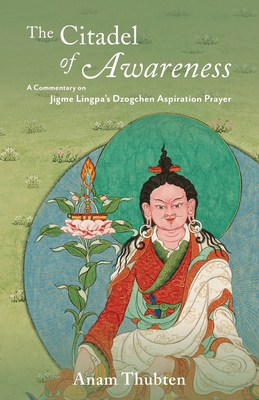 The Citadel of Awareness: A Commentary on Jigme Lingpa's Dzogchen Aspiration Prayer (Paperback)

Dzogchen is a particular practice that has its own history and tradition while it illuminates a timeless, universal truth. It can be regarded as the nondual aspect of Buddhism that transcends most doctrines. The aspiration prayer by eighteenth-century Dzogchen master, Jigme Lingpa, thoroughly covers the entire system of Dzogchen. It allows people to have a full comprehension of Dzogchen, including its philosophy. This book is a commentary on Jigme Lingpa's Dzogchen Aspiration Prayer, one of the most revered texts in the Nyingma Tibetan Buddhist tradition. It is written by Anam Thubten, a contemporary Tibetan Buddhist teacher known for his scholarship and ability to make ancient teachings accessible.