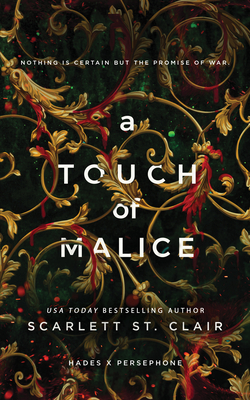 This is book number 3 in the Hades X Persephone series.

The next installment in the Hades and Persephone story from bestselling author Scarlett St. Clair. Discover the world of New Athens and the Greek gods in a series that readers are calling "hopelessly addictive."

"I am not sure who you think I am," she said. "But let me be clear—I am Persephone, future Queen of the Underworld, Lady of Your Fate—may you come to dread my presence."

Persephone and Hades are engaged. In retaliation, Demeter summons a snowstorm that cripples New Greece, and refuses to lift the blizzard unless her daughter calls off her engagement. When the Olympians intervene, Persephone finds her future in the hands of ancient gods, and they are divided. Do they allow Persephone to marry Hades and go to war with Demeter, or prohibit their union and take up arms against the God of the Dead?

Nothing is certain but the promise of war.

Scarlett St. Clair is the bestselling author of the HADES X PERSEPHONE SAGA, the HADES SAGA, KING OF BATTLE AND BLOOD, and WHEN STARS COME OUT. She has a Master's degree in Library Science and Information Studies and a Bachelors in English Writing. She is obsessed with Greek Mythology, murder mysteries, and the afterlife. You can find pictures of her adorable dog Adelaide on her Instagram at authorscarlettstclair, and updates on her books at www.scarlettstclair.com.