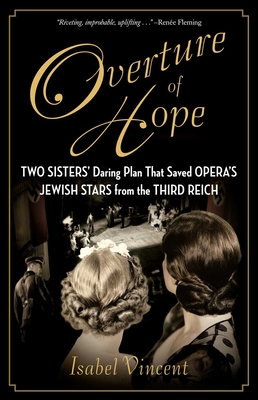 
Not Currently On Our Shelves. Usually Ships in 1-5 Days
Schindler's List meets The Sound of Music as best-selling New York Post investigative journalist Isabel Vincent delves into pre-World-War-II history to recover the amazing story of two British spinsters who masterminded a plan to spirit dozens of Jewish stars and personnel of the German and Austrian opera to England and save them from a terrible fate under the Third Reich. Will resonate with readers of The Nazi Officer's Wife and The Dressmakers of Auschwitz.

A Secret Aria of Courage and Suspense

Europe, 1937. Two British sisters, one a dowdy typist, the other a soon-to-be famous romance novelist. One shared passion for opera. With prospects for marriage and families of their own cut down by the scythe of World War I, the Cook sisters have thrown themselves into their love of music, with frequent pilgrimages to Germany and Austria to see their favorite opera stars perform.  But now with war clouds gathering and harassment increasing, the stars of Continental opera, many of whom are Jewish, face dark futures under the boot heel of the Nazis.

What can two middle-aged British spinsters do about such matters? They can form a secret cabal right under Hitler's nose and get to work saving lives. Along with Austrian conductor Clemens Krauss (a favorite of Hitler, but quietly working with the Cooks) the sisters conspire to bring together worldwide opera aficionados and insiders in an international operation to rescue Jews in the opera from the horrific fate that everyone intuits is coming. By the time war does arrive, the Cooks and their operatives have plucked over two dozen Jewish men and women from the looming maw of the Holocaust and spirited them to safety in England.

Packed with original research and vividly told with suspense, hope, and wonder by award-winning New York Post investigative journalist Isabel Vincent, author of nationally best-selling memoir Dinner with Edward, this singular tale reveals many new details of the seemingly naïve and oblivious Cook sisters' surreptitious bravery, daring, and passionate commitment as the two mount a successful rescue mission that saves dozens of lives and preserves the opera they love for another generation.

"A riveting, improbable, uplifting tale, made all the more exciting because it really happened!”—Opera great and 17-time Grammy Award winner Renée Fleming
Isabel Vincent is an award-winning investigative journalist for The New York Post and the author of nationally best-selling memoir Dinner with Edward, as well as Gilded Lily: Lily Safra, The Making of One of the World's Wealthiest Widows, sex trafficking exposé Body and Souls, and See No Evil, an investigation into Latin America’s biggest kidnapping cases. Her book Hitler’s Silent Partners, an account of the Swiss bank accounts left dormant after the Nazi era, won the Yad Vashem Award for Holocaust History. Vincent grew up in Canada. She began as a foreign correspondent in South America covering drug cartels, and later the conflicts in Kosovo and war in Angola. For many years Vincent has reported on New York City madness, mayhem, and corruption for the Post and a host of other publications.