Moving the Bar: My Life as a Radical Lawyer (Paperback) 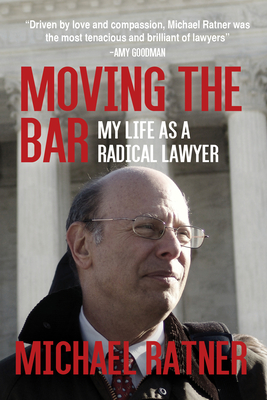 Moving the Bar: My Life as a Radical Lawyer (Paperback)

Michael Ratner (1943-2016) was one of America's leading human rights lawyers. He worked for more than four decades at the Center for Constitutional Rights (CCR) becoming first the Director of Litigation and then the President of what Alexander Cockburn called "a small band of tigerish people." He was also the President of the National Lawyers Guild.

Ratner handled some of the most significant cases In American history. This book tells why and how he did it.

His last case, which he worked on until he died, was representing truth-telling whistleblower and now political prisoner Julian Assange, the editor of WikiLeaks.

Ratner "moved the bar" by organizing some 600 lawyers to successfully defend habeas corpus, that is, the ancient right of someone accused of a crime to have a lawyer and to be brought before a judge.

Michael had a piece of paper taped on the wall next to his desk at the CCR. It read:

4 key principles of being a radical lawyer:

1. Do not refuse to take a case just because it is long odds of winning in court.

2. Use cases to publicize a radical critique of US policy and to promote revolutionary transformation.

Compelling and instructive, Moving the Bar is an indispensable manual for the next generation of activists and their lawyers.

Michael Ratner (1943-2016) was a New York-based civil rights attorney and a lifelong socialist. He was president of the National Lawyers Guild and the Center for Constitutional Rights and the author of several books including The Trial of Donald Rumsfeld: A Prosecution by Book, Against War with Iraq, Guantanamo: What the World Should Know, and (with Michael Smith) Who Killed Che?: How the CIA Got Away With Murder.