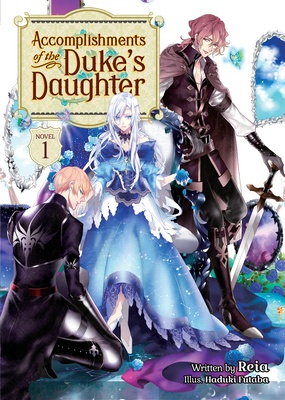 
Not Currently On Our Shelves. Usually Ships in 1-5 Days
You love the manga, now try the original light novels about one woman's search for a happy ending when she's trapped in an otome romance game--as the antagonist!

Iris Almeria, the daughter of a powerful duke, is arrested and forced to her knees in front of her fiancée. Her betrothed, Prince Edward, is rejecting her for another woman! As Iris’s life flashes before her eyes, she suddenly realizes she knows exactly what is coming next–because she has been reincarnated into her favorite otome game as its villainess. Quick thinking saves her from exile, but Iris can’t rest yet. If she wants to survive this world that sees her as wicked, she’ll have to change the world itself.
Reia is a Japanese author best known for the light novel and manga series Accomplishments of the Duke's Daughter.

Hazuki Futaba is a Japanese artist best known for the manga Crimson Empire: Circumstances to Serve a Noble and the light novel series Accomplishments of the Duke's Daughter.