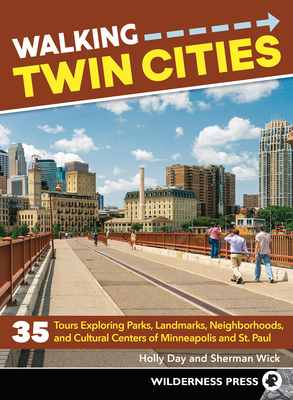 Grab your walking shoes, and become an urban adventurer. Holly Day and Sherman Wick guide you through 35 unique walking tours in the urban epicenter of the Upper Midwest. The Twin Cities are home to world-class museums and theaters, a mosaic of distinct neighborhoods, and an extensive greenbelt that combine to make it one of the most beautiful metropolitan areas in America. Each self-guided tour includes full-color photographs, a map, and need-to-know details like distance, difficulty, points of interest, and more.

Stroll from downtown Minneapolis to Minneahaha Falls, from St. Paul's Hidden Falls Park to historic Irvine Park. Explore the Mill District and its revitalized historic warehouses, and avoid winter's chill with eight miles of climate-controlled skyways. You'll soak up history, stories, and trivia on your way to the best cafes, bars, and nightlife in Minnesota. So find a route that appeals to you, and walk the Twin Cities

Holly Day's writing has appeared in more than 3,500 publications internationally, including The Oxford American, Computer Music Journal, ROCKRGRL, Music Alive!, Guitar One, Brutarian Magazine, Interface Technology, and Mixdown Magazine. Over the past couple of decades, her writing has received an Isaac Asimov Award, a National Magazine Award, a Dwarf Star Award, and two Midwest Writer's Grants. Her books include Music Theory for Dummies, Music Composition for Dummies, Guitar All-in-One for Dummies, Piano All-in-One for Dummies, and several poetry books. Sherman Wick is a native of the Twin Cities. Since receiving a history degree at the University of Minnesota, he's worked as a freelance writer and photographer, focusing on music, film, and Minnesota's rich cultural and historical offerings. Holly and Sherman started writing their first book together, The Insider's Guide to the Twin Cities, one week after marrying. Since then, they've also written Stillwater, Minnesota: A Brief History and Nordeast Minneapolis: A History. They live near downtown Minneapolis with their daughter, Astrid, while their son, Wolfgang, lives close by in St. Paul.