Operation Dragon: Inside the Kremlin's Secret War on America (Hardcover) 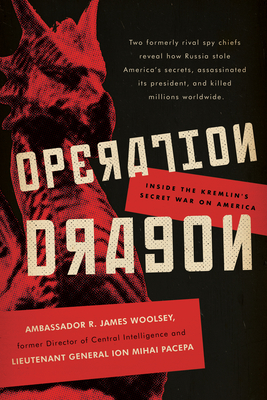 Operation Dragon: Inside the Kremlin's Secret War on America (Hardcover)

Former Director of Central Intelligence R. James Woolsey and former Romanian acting spy chief Lt. General Ion Mihai Pacepa, who was granted political asylum in the U.S. in 1978, describe why Russia remains an extremely dangerous force in the world, and they finally and definitively put to rest the question of who killed President Kennedy on November 22, 1963.

All evidence points to the fact that the assassination--carried out by Lee Harvey Oswald--was ordered by Soviet Premier Nikita Khrushchev, acting through what was essentially the Russian leader's personal army, the KGB (now known as the FSB). This evidence, which is codified as most things in foreign intelligence are, has never before been jointly decoded by a top U.S. foreign intelligence leader and a former Soviet Bloc spy chief familiar with KGB patterns and codes. Meanwhile, dozens of conspiracy theorists have written books about the JFK assassination during the past fifty-six years. Most of these theories blame America and were largely triggered by the KGB disinformation campaign implemented in the intense effort to remove Russia's own fingerprints that blamed in turn Lyndon Johnson, the CIA, secretive groups of American oilmen, Howard Hughes, Fidel Castro, and the Mafia. Russian propaganda sowed hatred and contempt for the U.S. quite effectively, and its operations have morphed into many forms, including the recruitment of global terror groups and the backing of enemy nation- states. Yet it was the JFK assassination, with its explosive aftermath of false conspiracy theories, that set the model for blaming America first.
Ambassador R. James Woolsey, former director of Central Intelligence, former undersecretary of the Navy, and former ambassador to the Negotiations on Conventional Armed Forces in Europe is a lawyer and diplomat who has served in the U.S. government on many different occasions. He has held presidential appointments in two Republican and two Democratic administrations. He also has been a member of the National Commission on Terrorism, the Commission to Assess the Ballistic Missile Threat to the United States, the Commission on Federal Ethics Law Reform, the President's Blue Ribbon Commission on Defense Management, and the President's Commission on Strategic Forces. Lt. Gen. Ion Mihai Pacepa, the highest-ranking intelligence official ever to defect from the Soviet Bloc, served as acting chief of communist Romania's espionage service and top adviser to President Nicolae Ceausescu. Today, with assassination threats and mil- lion-dollar rewards still hanging over his head, Pacepa lives in the U.S. under a CIA-protected identity and remains active as a uniquely insightful writer on current affairs. He is the author of a number of books, including Red Horizons: The True Story of Nicolae and Elena Ceausescus' Crimes, Lifestyle, and Corruption and Disinformation: Former Spy Chief Reveals Secret Strategies for Undermining Freedom, Attacking Religion, and Promoting Terrorism.