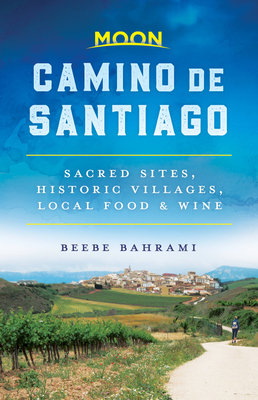 
This book may be available, use the button below to request more information from our team.
Over 1,200 years old, 500 miles long, and rich with tradition and sacred history: Embark on the trip of a lifetime with Moon Camino de Santiago. Inside you'll find:Start your transformative journey with the expert insight, unique suggestions, and practical advice of Moon Camino de Santiago.
A Colorado native based in southern New Jersey, Beebe Bahrami extends her idea of home on regular semi-nomadic treks, visits, explorations, and excavations in southwestern France and northern Spain, one of Europe's oldest, deeply traversed, wild, and culturally rich landscapes.

Ever since she first stepped on to the Camino de Santiago in 1995, Beebe knew she found her place in the world and has delved deeply into these ancient paths and places across France and Spain. Having walked the Camino de Santiago now too many times to count, she has also lived on different stretches of the trail. She has survived pigeon, boar, and rabbit hunting season in the Pyrenees, gone mushroom hunting in Navarra, detoured with sheepherders in Rioja, practiced chanted prayer in Castile, pressed grapes in León, and studied herbs and rituals with a druid in Galicia.

Beebe is the author of two travel memoirs, Café Oc: A Nomad's Tales of Magic, Mystery, and Finding Home in the Dordogne of Southwestern France, and Café Neandertal: Excavating the Past in One of Europe's Most Ancient Places. In addition to Moon Camino de Santiago, she has penned several travel guides, including The Spiritual Traveler Spain: A Guide to Sacred Sitesand Pilgrim Routes, and Historic Walking Guides Madrid. Her work also appears in Wine Enthusiast, The Bark, and Archaeology, among others. To read her work, visit www.beebebahrami.weebly.com.

When Beebe is not on the trail or writing about travel, food, wine, outdoor adventures, archaeology, and sacred traditions, she is studying trekking gear catalogs, pouring over obscure cookbooks, trying to master the subjunctive in French and Spanish, doing yoga, and surfing her trusty 7'6" surfboard while dreaming of her next Camino.