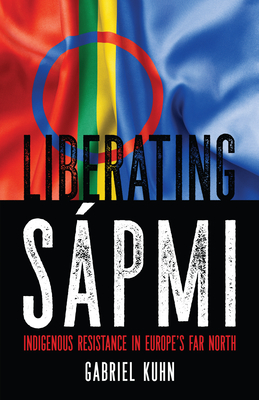 
Backordered, maybe unavailable. Email or call for more details.
The Sámi, who have inhabited Europe’s far north for thousands of years, are often referred to as the continent’s “forgotten people.” With Sápmi, their traditional homeland, divided between four nation-states—Norway, Sweden, Finland, and Russia—the Sámi have experienced the profound oppression and discrimination that characterize the fate of indigenous people worldwide: their lands have been confiscated, their beliefs and values attacked, their communities and families torn apart. Yet the Sámi have shown incredible resilience, defending their identity and their territories and retaining an important social and ecological voice—even if many, progressives and leftists included, refuse to listen. Liberating Sápmi is a stunning journey through Sápmi and includes in-depth interviews with Sámi artists, activists, and scholars boldly standing up for the rights of their people. In this beautifully illustrated work, Gabriel Kuhn, author of over a dozen books and our most fascinating interpreter of global social justice movements, aims to raise awareness of the ongoing fight of the Sámi for justice and self-determination. The first accessible English-language introduction to the history of the Sámi people and the first account that focuses on their political resistance, this provocative work gives irrefutable evidence of the important role the Sámi play in the resistance of indigenous people against an economic and political system whose power to destroy all life on earth has reached a scale unprecedented in the history of humanity. The book contains interviews with Mari Boine, Harald Gaski, Ann-Kristin Håkansson, Aslak Holmberg, Maxida Märak, Stefan Mikaelsson, May-Britt Öhman, Synnøve Persen, Øyvind Ravna, Niillas Somby, Anders Sunna, and Suvi West.
Gabriel Kuhn is an author, translator, and union activist. He has published widely in English and German. His texts have been translated into more than a dozen languages.
“I'm highly recommending Gabriel Kuhn's book Liberating Sápmi to anyone seeking to understand the world of today through indigenous eyes. Kuhn concisely and dramatically opens our eyes to little-known Sápmi history, then in the perfect follow-up brings us up to date with a unique collection of interviews with a dozen of today's most brilliant contemporary Sámi voices. Bravo.”—Buffy Sainte-Marie, Cree, singer-songwriter

“Comprised largely of interviews with Sámi from a broad range of backgrounds—including artists, academics, and activists—Liberating Sápmi provides not only a history of Sámi anticolonial resistance but also unique insights into the Sami social movements that have arisen. The book is well illustrated with maps, photographs, and Sámi art.”—Gord Hill, Kwakwaka'wakw, author of 500 Years of Indigenous Resistance

“The long struggle of the Sámi to defend their lands and way of life against the ravages of eurosupremacist ‘modernity’ is both inspiring and all but unknown in North America. The antidote to such obliviousness embodied in this book should be not only imbibed but celebrated by anyone seeking viable alternatives to the burgeoning death culture in which we’ve been buried alive.” —Ward Churchill, author of Wielding Words like Weapons

“I was skeptical about a Sámi book by a non-Sámi, so it was thrilling to discover that Gabriel Kuhn’s Liberating Sápmi is not only a factual, valuable resource but a compelling read. His interviews with well-known Sámi activists take unexpected paths, complicating Sámi identity. Kuhn begins with a thoughtful introduction to his methods and a concise review of Sámi history, adds examples of activist art, helpful maps, a glossary, notes, and a guide to other English-language resources. (In other words, manna for Sámi Americans.) While destined to become a go-to resource in indigenous studies, this book will inform and inspire everyone interested in the struggle for self-determination.” —Julie Whitehorn, president and cofounder, Pacific Sámi Searvi