A History of the Human Brain: From the Sea Sponge to CRISPR, How Our Brain Evolved (Hardcover) 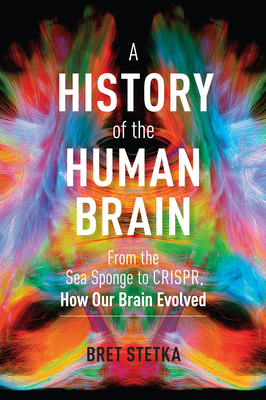 A History of the Human Brain: From the Sea Sponge to CRISPR, How Our Brain Evolved (Hardcover)

“Crack open this book and take a read. You will be transported, illuminated, and delighted.” —Psychology Today

Just 125,000 years ago, humanity was on a path to extinction, until a dramatic shift occurred. We used our mental abilities to navigate new terrain and changing climates. We hunted, foraged, tracked tides, shucked oysters—anything we could do to survive. Before long, our species had pulled itself back from the brink and was on more stable ground. What saved us? The human brain—and its evolutionary journey is unlike any other.

In A History of the Human Brain, Bret Stetka takes us on this far-reaching journey, explaining exactly how our most mysterious organ developed. From the brain’s improbable, watery beginnings to the marvel that sits in the head of Homo sapiens today, Stetka covers an astonishing progression, even tackling future brainy frontiers such as epigenetics and CRISPR. Clearly and expertly told, this intriguing account is the story of who we are. By examining the history of the brain, we can begin to piece together what it truly means to be human.

Bret Stetka is an Editorial Director at Medscape.com—the professional division of WebMD.com. He is a non-practicing physician, and a freelance health and science journalist for a variety of print and online publications. He is a graduate of the University of Virginia School of Medicine. In 2006, he completed a research and science writing post-doctoral year at Mount Sinai School of Medicine in New York City, where he worked in a biological psychiatry laboratory and authored a number of scientific papers published in peer-reviewed journals. He is now a regular contributor to NPR as well as Scientific American Magazine, where he writes about neuroscience, psychiatry, and evolution. His work has also appeared in WIRED and Men’s Journal, as well as Slate, Popular Mechanics, and The Atlantic.

“A History of the Human Brain is a unique, enlightening, and provocative account of the most significant question we can ask about ourselves.” —Richard Wrangham, author of The Goodness Paradox

“One of the most lucid, clear-eyed, and talented science writers of our time—Bret Stetka—now turns his attention to the evolution of the human brain, taking us on a captivating journey from its origins to the present, enhancing our understanding of how this phenomenal organ and its 100 billion neurons work.” —Eric Topol, MD, author of Deep Medicine

“Clear, evidence based and engrossing. What we know about how the human brain works could fit on a figurative pinhead. But if you want to understand what we know about its evolution, this book is a terrific resource.” —Felice Jacka, PhD, director of the Food & Mood Centre, Deakin University, Australia

“There are lots of ideas out there about consciousness and the human brain—the untidy product of millions of years of evolution. Bret Stetka comes as close as you could hope to making sense of them in this entertaining and wide-ranging book.” —Ian Tattersall, curator emeritus, Division of Anthropology, American Museum of Natural History

“Crack open this book and take a read. You will be transported, illuminated, and delighted.” —Psychology Today

“Science journalist Bret Stetka takes the reader on a roller coaster ride up the evolutionary trail from the sponge to modern man.” —The San Francisco Book Review


“A readable and engaging history of how our most mysterious organ developed over time… from the brain’s improbable and watery beginnings to the super-complex marvel that’s found within the head of Homo sapiens today.” —The Genetic Literacy Project