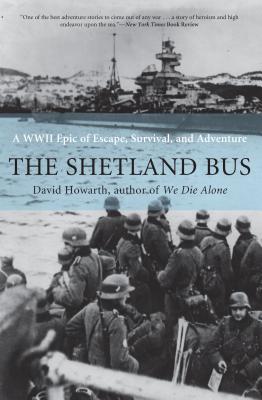 
Backordered, maybe unavailable. Email or call for more details.
The Shetland Bus recounts the hundreds of crossings of small boats from the Shetland Islands to German-occupied Norway to supply arms to the Resistors and to rescue refugees all under constant threat by German U-boats and winter storms.
David Howarth ran a spy ring during World War II from which this book was derived. Mr. Howarth, who died in 1991, was the author of two dozen major books of history.

One of the best adventure stories to come out of any war . . . a story of heroism and high endeavor upon the sea.” The New York Times Book Review

Mr. Howarth does an especially good job of describing, without any heroics, the vicissitudes undergone by the survivors of these expeditions, many of whom managed to fight their way out of Norway and to freedom.” The New Yorker

One after another of Howarth’s stories shows the skill, hardihood, and sheer courage of his men.” Chicago Tribune

For many of us the stories of Beowulf and Siegfried were required reading, but here in this modern saga are tales of resourcefulness, discipline, character and heroism which match the courage of those legendary heroes and excel them by their impulsion of patriotism and brotherly love.” Christian Science Monitor