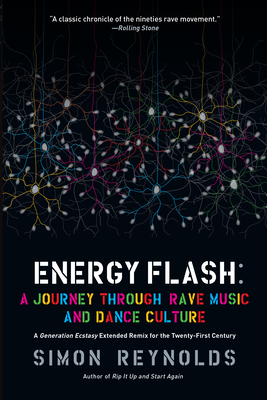 
Not Currently On Our Shelves. Usually Ships in 1-5 Days
Ecstasy did for house music what LSD did for psychedelic rock. Now, in Energy Flash, journalist Simon Reynolds offers a revved-up and passionate inside chronicle of how MDMA (“ecstasy”) and MIDI (the basis for electronica) together spawned the unique rave culture of the 1990s.

England, Germany, and Holland began tinkering with imported Detroit techno and Chicago house music in the late 1980s, and when ecstasy was added to the mix in British clubs, a new music subculture was born. A longtime writer on the music beat, Reynolds started watching—and partaking in—the rave scene early on, observing firsthand ecstasy’s sense-heightening and serotonin-surging effects on the music and the scene. In telling the story, Reynolds goes way beyond straight music history, mixing social history, interviews with participants and scene-makers, and his own analysis of the sounds with the names of key places, tracks, groups, scenes, and artists. He delves deep into the panoply of rave-worthy drugs and proper rave attitude and etiquette, exposing a nuanced musical phenomenon.

Read on, and learn why is nitrous oxide is called “hippy crack.”
Simon Reynolds is a consulting editor at Spin magazine. He is also the author of Blissed Out: The Raptures of Rock, The Sex Revolts: Gender, Rebellion and Rock 'n' Roll, Totally Wired, Bring the Noise, and Energy Flash.
“Reynolds provides an expanded and updated version of his now-classic Generation Ectasy...Reynolds approaches his subject as both fan and critic, finding the perfect balance between autobiography and eyewitness. He also happens to be a terrific writer... Authoritative.” —Booklist