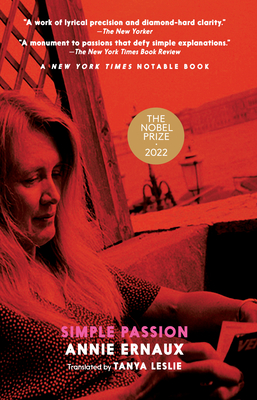 Simple Passion is a work unlike any other. Detailing Ernaux's obsession and affair with a younger, married man, this short work of auto-fiction is a beautiful, raw mirror of human nature. A very obvious example of why Annie Ernaux was chosen for the Nobel Prize.

— Gary L.
WINNER OF THE 2022 NOBEL PRIZE IN LITERATURE

In her spare, stark style, Annie Ernaux documents the desires and indignities of a human heart ensnared in an all-consuming passion.

Blurring the line between fact and fiction, an unnamed narrator attempts to plot the emotional and physical course of her 2 year relationship with a married foreigner where every word, event, and person either provides a connection with her beloved or is subject to her cold indifference.

With courage and exactitude, she seeks the truth behind an existence lived entirely for someone else, and, in the pieces of its aftermath, she is able to find it.
Born in 1940, ANNIE ERNAUX grew up in Normandy, studied at Rouen University, and began teaching high school. From 1977 to 2000, she was a professor at the Centre National d’Enseignement par Correspondance. Her books, in particular A Man’s Place and A Woman’s Story, have become contemporary classics in France. She won the prestigious Prix Renaudot for A Man's Place when it was first published in French in 1984. The English edition was a New York Times Notable Book and a finalist for the Los Angeles Times Book Prize. The English edition of A Woman’s Story was a New York Times Notable Book.
“The triumph of Ms. Ernaux's approach … is to cherish commonplace emotions while elevating the banal expression of them … A monument to passions that defy simple explanations.” —The New York Times Book Review

“A work of lyrical precision and diamond-hard clarity.” —The New Yorker

“A stunning story, despite its detachment and the careful exclusions of any excess, that pulsates with the very passion Ernaux so truthfully describes ... Small, but abundantly wise.” —Kirkus Reviews

“All this—the suffering and anxiety of waiting, the brief soulagement of lovemaking, the lethargy and fatigue that follow, the renewal of desire, the little indignities and abjections of both obsession and abandonment—Ernaux tells with calm, almost tranquillized matter-of-factness [that] feels like determination, truth to self, clarity of purpose.” —The Washington Post