Why Men Love Bitches: From Doormat to Dreamgirl—A Woman's Guide to Holding Her Own in a Relationship (Paperback) 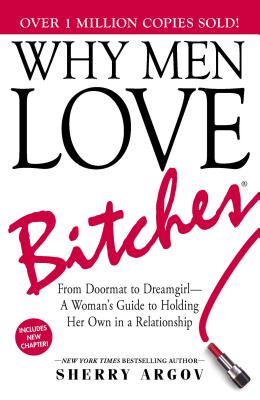 Why Men Love Bitches: From Doormat to Dreamgirl—A Woman's Guide to Holding Her Own in a Relationship (Paperback)


Not Currently On Our Shelves. Usually Ships in 1-5 Days
Discover why men are attracted to strong, independent women with this straight-forward, accessible dating guide from New York Times bestselling author Sherry Argov.

Do you feel like you are too nice? Sherry Argov’s Why Men Love Bitches delivers a unique perspective as to why men are attracted to a strong woman who stands up for herself. With saucy detail on every page, this no-nonsense guide reveals why a strong woman is much more desirable than a “yes woman” who routinely sacrifices herself. The author provides compelling answers to the tough questions women often ask:

-Why are men so romantic in the beginning and why do they change?
-Why do men take nice girls for granted?
-Why does a man respect a woman when she stands up for herself?

Full of advice, hilarious real-life relationship scenarios, “she says/he thinks” tables, and the author’s unique “Attraction Principles,” Why Men Love Bitches gives you bottom-line answers. It helps you know who you are, stand your ground, and relate to men on a whole new level. Once you’ve discovered the feisty attitude men find so magnetic, you’ll not only increase the romantic chemistry—you’​ll gain your man's love and respect with far less effort.
Sherry Argov is the author of Why Men Love Bitches, and Why Men Marry Bitches. Her writing has appeared in countless magazines including People, Vanity Fair, US Weekly, Cosmopolitan, Glamour, Elle, Maxim, and Esquire. Her work has been featured nationally on the TODAY show, The View, MSNBC, Fox News Channel, and MTV.  Her first book Why Men Love Bitches was named one of the "Ten Most Iconic Relationship Books of the Past Ten Years" by Yahoo, and "America's Top Relationship Book" by Book Tribe. A first-class theater production abroad, her first-class theater play has topped Billboard charts for seven consecutive years, and has received critical acclaim. Her work is currently published throughout the world in over thirty languages. For more information, visit the author's website at SherryArgov.com.
“A self-help classic.”

“One of ‘The 10 Most Iconic Relationship Books of the Past Ten Years."

“Men don’t really go for ‘nice.’ They go for ‘interesting.’”

“We’re talking about having so much self-respect, Aretha Franklin would high-five you.”

“The pejorative meaning of the word ‘bitch’ has been reclaimed... it means a strong, feisty woman who has moxie, and knows when to use it. A bitch is... sap free.”

“[Argov is] talking about a strong woman. Someone who knows what she’s doing in life. Someone who will share the load, but who will stand her ground.”

—Joy Behar, Co-host of The View

“Sherry Argov shows women how to transform a casual relationship into a committed one.”

“The Best of Culture.”

“A must-read at Sunday brunch.”

“Why Men Love Bitches flew off the shelves.... Men thrive with women who can set boundaries and who push back when they try to cross the line.”

“An anti-whining manifesto that encourages women who feel like doormats to develop a sense of independence.”

“Ultimately Sherry Argov’s message boils down to one of confidence and self respect, which, let’s face it...it’s the only sane way to go. In short...stay for the sage advice.”

“I highly recommend this book for every strong young woman entering college.”

“This book is my Bible.”