King Fisher: The Short Life and Elusive Legend of a Texas Desperado (Hardcover) 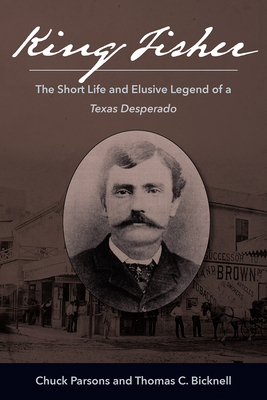 King Fisher: The Short Life and Elusive Legend of a Texas Desperado (Hardcover)


Not Currently On Our Shelves. Usually Ships in 1-5 Days
America’s Wild West created an untold number of notorious characters, and in southwestern Texas, John King Fisher (1855– 1884) was foremost among them. To friends and foes alike, he insisted he be called “King.” He found a home in the tough sun-beaten Nueces Strip, a lawless land between the Nueces River and the Rio Grande. There he gathered a gang of rustlers around him at his ranch on Pendencia Creek. For a decade King and his gang raided both sides of the Rio Grande, shooting down any who opposed them. Newspapers claimed King killed potential witnesses—he was never convicted of cattle or horse stealing, or murder.
King’s reign ended when he was arrested by Texas Ranger Captain Leander McNelly. In no uncertain terms he advised Fisher to change his ways, so King became deputy sheriff of Uvalde County. But his hard-won respectability would not last. On a spring night in 1884, King made the mistake of accompanying the truly notorious gambler and gunfighter Ben Thompson on a tour of San Antonio, where several years prior Thompson shot down Jack Harris at the latter’s saloon and theater, the Vaudeville. Recklessly, King Fisher accompanied Thompson back to the theater, where assassins were waiting. When the smoke cleared, Fisher was stretched out beside Thompson, dead from thirteen gunshot wounds.
CHUCK PARSONS is the author of Captain John R. Hughes and The Sutton-Taylor Feud and coauthor of A Lawless Breed, a biography of John Wesley Hardin. He lives in Luling, Texas. THOMAS C. BICKNELL is the co-author (with Chuck Parsons) of Ben Thompson: Portrait of a Gunfighter. His research and articles have appeared in various periodicals including True West and Wild West.
“Parsons and Bicknell seek to demythologize the man and the controversial events that marked the short life and violent times of the ‘King’ of the South Texas outlaws. The research is extensive, impressive, and original. Given the limitations and dearth of reliable primary sources, newspapers notwithstanding, the authors have presented a thorough and convincing accounting of the life of John King Fisher.”—Michael L. Collins, author of Texas Devils: Rangers and Regulars on the Lower Rio Grande, 1846–1861

“The writing team of Parsons and Bicknell has done it again. As they did with Ben Thompson: Portrait of a Gunfighter, these two historians have come up with new and corrected information on King Fisher, a long-neglected outlaw/lawman of the Wild West. Parsons and Bicknell bring forth previously unknown or misreported aspects of Fisher’s life. Both readable and interesting, readers can count on this volume to become the definitive account of John King Fisher.”—Roy B. Young, coeditor of A Wyatt Earp Anthology: Long May His Story be Told (UNT Press)

“King Fisher is a prime example of a man who was both outlaw and law officer. He was killed in a hail of bullets at the famous Vaudeville Saloon during his term as a Texas deputy sheriff. New and exciting information is revealed in this well researched book.”—Pam Potter, former president, Wild West History Association

“As a lifelong resident of southern Texas, I am very interested in the history of the area, especially the region of the Nueces Strip, and thus have followed the careers of both lawmen and outlaws of the area with zest.  As a historian of the area familiar with other books of these fine authors, I eagerly await the appearance of a new biography of King Fisher, which has been sorely needed since O. C. Fisher's original in 1966.”—Kurt House, board member of the Wild West History Association and author of Hand Forged for Texas Cowboys