Buddhism without Beliefs: A Contemporary Guide to Awakening (Paperback) 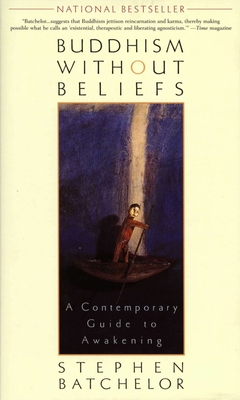 Buddhism without Beliefs: A Contemporary Guide to Awakening (Paperback)


Not Currently On Our Shelves. Usually Ships in 1-5 Days
A national bestseller and acclaimed guide to Buddhism for beginners and practitioners alike

In this simple but important volume, Stephen Batchelor reminds us that the Buddha was not a mystic who claimed privileged, esoteric knowledge of the universe, but a man who challenged us to understand the nature of anguish, let go of its origins, and bring into being a way of life that is available to us all. The concepts and practices of Buddhism, says Batchelor, are not something to believe in but something to do—and as he explains clearly and compellingly, it is a practice that we can engage in, regardless of our background or beliefs, as we live every day on the path to spiritual enlightenment.
Stephen Batchelor is a former monk in the Tibetan and Zen traditions and the author of the national bestseller Buddhism Without Beliefs. He lectures and conducts meditation retreats worldwide, and is a contributing editor for Tricycle.
"Batchelor...suggests that Buddhism jettison reincarnation and karma, thereby making possible what he calls an 'existential, therapeutic and liberating agnosticism." —Time magazine

"Buddhism Without Beliefs is the kind of finely written primer about the concepts of Buddhism that even a heathen like me can appreciate and understand. For the non-Buddhist, or the aspiring Buddhist, it will be of much assistance. Filled with compassion, lucidly written, this is a book that explains much about an ancient, ever-living philosophy that has much to offer the stunned searchers of truth in our chaotic age of modernity." —Oscar Hijuelos, author of Mr. Ives' Christmas and The Mambo Kings Play Songs of Love

"Radiant in its clarity, Buddhism Without Beliefs reminds us not just of Buddhism's true nature, but of our own as well. Freeing us from the notion of Buddhism as a religion, Stephen Batchelor shows us how necessary the Buddha's teachings are in today's world. It may not be what he intended, but he has made a believer out of me." —Mark Epstein, M.D., author of Thoughts Without a Thinker: Psychotherapy from a Buddhist Perspective

"Though he is a former monk in both the Zen and Tibetan traditions, Batchelor is now associated with a nondenominational Buddhist community in England. He deliberately eschews elitist, monastic Buddhist traditions, which often make enlightenment appear all but impossible to attain. Throughout, simple meditation exercises acquaint readers with Buddhist principles that illuminate 'the nature of the human dilemma and a way to its resolution.'" —Publishers Weekly