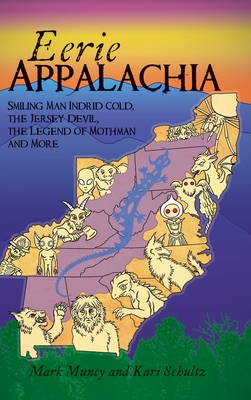 Gear up for a frightful jaunt into the darkest reaches of the ancient Appalachians.

Folk deep within Appalachian hollers lean close to share stories of the inexplicable with hushed awe. Monsters rumbling in the hills. Strange lights darting through the pitch-black night sky. Horrible occurrences, almost ineffable in their bizarre tragedy. Tall tales, you might say. But tell that to the Flatwoods monster in Braxton County, West Virginia. Or the Goat Man of Louisville--look into his humanoid eyes and let him know you don't believe. And what of those apparitions in Mammoth Cave's Corpse Rock, or the Satan-spawn known as the Jersey Devil? How do you respond when those mysteries confront? From metaphysical energy that swirls near the Serpent Mound in Ohio to Point Pleasant's Mothman legacy, Mark Muncy and Kari Schultz explore the dark history lurking in the shadows of Appalachia..