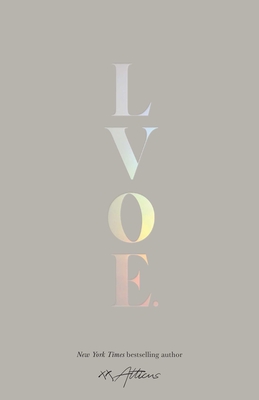 
Not Currently On Our Shelves. Usually Ships in 1-5 Days
For the first time since he began writing, three-time New York Times bestselling author Atticus is inviting readers to take a look behind the mask as he embarks on a powerful journey inward in search of love, peace, and acceptance.

Even if you’ve never heard his name, you’ve probably met someone with his words tattooed on their skin or heard them sung at a music concert. Atticus, the young, anonymous NYT Best Selling Author, has taken the world by storm with his beautiful poetry and powerful, simple themes of love and strength of the human spirit. Dubbed “The #1 Person to Follow” by Teen Vogue. And “The World’s Most Tattoo-able Poet” by Galore Magazine, he has been followed, quoted, and shared by some of the world’s top superstars, from Karlie Kloss to Shawn Mendes, Emma Roberts, and Alicia Keys. His words have been tattooed by tens of thousands of his avid followers. He has been featured in Time Magazine, Elle, The Guardian, Fast Company, Publishers Weekly, The New York Times, and The Wall Street Journal. He has worked with Kygo, Maroon 5, Absolute Vodka, Stance Socks, Target, Urban Outfitters, and Refinery 29. In 2020, Atticus launched his own brand of wine, aptly called Lost Poet, which has become the #1 selling wine on Winc.com. All while wearing a mask and keeping his identity a secret. In his words, “sending love from the shadows.”

His fourth poetry collection, LVOE., is a study into himself. Using his instantly recognizable lyrical style, gorgeous black-and-white illustrations, and relatable themes, Atticus will once again dazzle readers, inspiring them to also look within. This collection will feature all-new poems, each paired with beautiful sketches that bring the words alive from the page.

An exploration of self-love, meditation, meaning, loss, and romance, LVOE. is a look forward, a look backward, but most importantly a look inward to the often confusing yet hopeful human experience.

Atticus is a three-time New York Times bestselling poet. He is a storyteller, traveler, and observer. Born in Ashford, Ireland, he’s spent much of his life exploring the world but now calls California his home. He loves the ocean, the desert, and playing with words. After losing a friend to the “complications of fame,” Atticus has chosen to remain forever anonymous, preferring to “send love from the shadows.” Atticus is the author of Love Her Wild, The Dark Between Stars, and The Truth About Magic. Visit him on Instagram at @atticuspoetry.