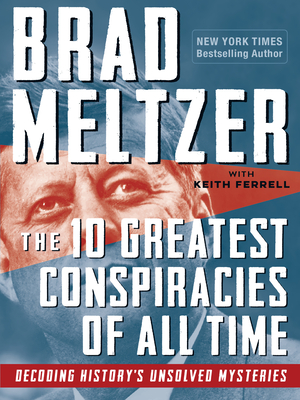 By Brad Meltzer, Keith Ferrell (With)

Wanted: the truth. In a riveting collection, Brad Meltzer guides us through the 10 greatest conspiracies of all time, from Leonardo da Vinci’s stolen prophecy to the Kennedy assassination. This richly illustrated book serves up those fascinating, unexplained questions that nag at history buffs and conspiracy lovers: Why was Hitler so intent on capturing the Roman “Spear of Destiny?” Where did all the Confederacy’s gold go? What is the government hiding in Area 51? And did Lee Harvey Oswald really act alone?

Meltzer sifts through the evidence, weighs competing theories, separates what we know to be true and what’s still––and perhaps forever––unproved or unprovable, and in the end, decodes the mystery and arrives at the most likely explanation.

Brad Meltzer is the #1 New York Times bestselling author of The Inner Circle, The Book of Fate, and seven other bestselling thrillers. In addition to his fiction, Brad is one of the only authors to ever have books on the bestseller list for nonfiction (History Decoded), advice (Heroes for My Son and Heroes for My Daughter), children's books (I Am Amelia Earhart and I Am Abraham Lincoln) and even graphic books (Justice League of America). He is also the host of Brad Meltzer's Decoded on the History Channel, and Brad Meltzer's Lost History on H2. He currently lives in Florida. You can find much more about him at BradMeltzer.com. You can also see what he's doing right now at Facebook.com/BradMeltzer and on Twitter @bradmeltzer.