The Great Reset: And the War for the World (Hardcover) 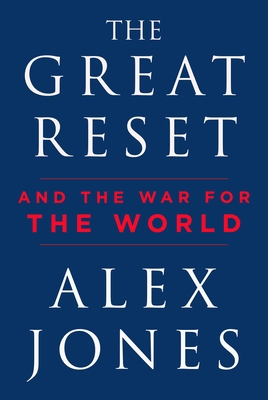 The Great Reset: And the War for the World (Hardcover)


Not Currently On Our Shelves. Usually Ships in 1-5 Days
In The Great Reset: And the War for the World, the most controversial man on earth Alex Jones gives you a full analysis of The Great Reset, the global elite's international conspiracy to enslave humanity and all life on the planet.

If you really want to know what’s happening in the world, this is the one book you must read now. Alex Jones is the most censored man on the planet and you should ask yourself why that is. There is a powerful authoritarian takeover in process that is seeking to capture the entire human system and turn it into an artificial factory farm controlled system. We are in a war for the future of the world. In this book, you will hear from the world’s elites, from their own mouths, what they are planning for you and your families and you will learn what you can do to fight it.

From central bankers, corporate billionaires, and corrupted government officials, global elites have been organizing a historic war on humanity under a trans-humanist, scientific dictatorship. Alex Jones was the first major figure to expose the World Economic Forum’s agenda. He has dedicated the last 30 years of his life to studying The Great Reset, conducting tens of thousands of interviews with top-level scientists, politicians, and military officials in order to reverse engineer their secrets and help awaken humanity.

The Great Reset: And the War for the World chronicles the history of the global elites' rise to power and reveals how they’ve captured the governments of the world and financed The Great Reset to pave the way for The New World Order.

Once dubbed a conspiracy theory, but now openly promoted by the most powerful corporations and governments, The Great Reset is a planned attempt to redistribute all the world’s wealth and power into the hands of banks, corporations, billionaires, and The World Economic Forum.

If you read one book in a lifetime, this is it. In The Great Reset: And the War for the World, you will discover from the self-appointed controllers of the planet in their own words, their plan for what they call the final revolution, or The Great Reset.

The only way this corporate fascist conspiracy can succeed is if the people of the world are not aware of it. And this book lays out their sinister blueprint and how to stop it. While many great books have been written to help awaken people to this sinister agenda, no author has ever spent as much time and research on The Great Reset as Alex Jones.

The Great Reset: And the War for the World is the undisputed trailblazer for understanding what’s happening and how to stop it.
Born and raised in Texas, Alex Jones cuts through the lies of the globalists’ official narrative with unrivaled analysis that has simultaneously led to him becoming the most talked about AND the most censored name in broadcasting.

Jones has indisputably left his mark on popular culture and has influenced many political and prominent figures in the industry. Wielding the slogan "There is a war on for your mind," Jones challenges big media with his daily broadcast of The Alex Jones Show by covering news the architects of the Great Reset want to be kept hidden.

But lately, due to his discernment repeatedly being vindicated, the fan-created phrase “Alex Jones was right” may now be the most iconic line associated with the radio host.

From the roots of his public-access show in Austin, Texas in the ’90s, to now running and operating his own media empire with over 400 radio and cable/television stations, hundreds of online streaming platforms, and international syndication, Jones' wildly-popular Infowars has proven itself to be a powerful counter to the corporate-owned mainstream media.

Jones built Infowars from the ground up by putting profits back into the company. The listeners and viewers are Alex’s partners, and he has vowed to honor their trust and always remain truly independent.

Daily, on his titular radio broadcast, Jones connects the dots and digs deeper into the story—often with the insight of experts, whistleblowers and insiders—to seek the truth and expose the scientifically engineered lies of the globalists and their ultimate goal of enslaving humanity.

Jones defined globalists and their mission during a recent edition of The Alex Jones Show: "A globalist is a member of the global-corporate combine that is attempting to establish an authoritarian world government, whose eventual aim of world government is to be able to carry out a transhumanist revolution that results in the death of the vast majority of the world population and, out of that cataclysm, a new super race."

Jones uses his production to reach as many hearts and minds as possible, because he believes that by informing people about the true nature of power, we can foster a real debate about humanity's destiny, and allow the species to evolve toward a more orderly singularity, that has humans at the core of a system, which is based around maintaining free will and integrity. This defies the transhumanist goal of Social Darwinism and scientific dictatorship.

Jones is internationally recognized as a trailblazer of new media and an icon of the Great Awakening and the pro-liberty movement.

"Alex Jones is a model for people to create their own media," Michael Harrison, editor of the industry trade magazine Talkers, told Rolling Stone writer Alexander Zaitchik. "When the history is written of talk broadcasting's transition from the corporate model of the 20th century to the digital, independent model of the 21st century, he will be considered an early trailblazer."

Additionally, Jones is an accomplished filmmaker who has produced many works since his first documentary, America: Destroyed By Design, was released in 1997. His seminal film, Endgame: Blueprint For Global Enslavement (2007), is more important now than ever before.

Also, Jones had a cameo role in Richard Linklater's Waking Life, a part that received a standing ovation at the Sundance Film Festival. He also appeared as the "street prophet" in Linklater's 2006 film, A Scanner Darkly, based on the novel of the same name by Philip K. Dick.

“Alex’s mind is a turbocharged research and information processor, and he’s a really gifted, articulate communicator,” director Linklater once said. “Most people struggle to articulate all the swirling overabundance of information out there and aren’t that passionate about anything, but Alex pulls it all together for a lot of people.”

Indeed, Alex Jones possesses three traits globalists have worked tirelessly to stamp out of the masses in order to create a permanent underclass: being well-read, having a good memory, and caring about others.
“Alex is right about far more than he is wrong about.... He’s the most misunderstood guy on the planet.”
—JOE ROGAN

“We are actually at War—a hybrid war of economics, cyber, psychology, and, yes, information. One of the field Commanders is Alex Jones of Austin, Texas—brilliant, irascible, tenacious. Alex has done his countrymen a great service: in one book he has given the structure and dynamics, the history and the processes of a New Order we see evolving daily. The Great Reset: And the War for the World is your battle map for what is ahead. Alex Jones is feared and relentlessly attacked by the very architects of this power structure. That is why he must be read and studied now.”
—STEVE BANNON
“If Alex Jones is just a crackpot, why are the most powerful people in the country trying to silence him? No one bothers to censor the flat-earthers. Maybe Alex Jones is onto something. Read this book and decide for yourself who’s crazy.”
—TUCKER CARLSON
“Alex has done an excellent job of bringing the globalists’ plans into the light. When we shine the light on darkness, the darkness can’t hide. It can only retreat.”
—DR. MERCOLA, founder of Mercola.com, the most visited natural health site on the internet for the last twenty years
“In The Great Reset, Alex Jones boldly showcases the history of engineered global collapse as it is unfolding in the present. No person living today has spent more time dissecting and exposing this anti-human, anti-freedom agenda than Alex Jones, and this book will one day be seen as a critical marker in the history of the fall (and rebuilding) of human civilization.”
—MIKE ADAMS, founder, NaturalNews.com and Brighteon.com
“Alex Jones may be the most maligned patriot in the country, but virtually every threat to our liberty that he has predicted has come to pass.”
—ROGER STONE