Walking with Ghosts in Papua New Guinea: Crossing the Kokoda Trail in the Last Wild Place on Earth (Hardcover) 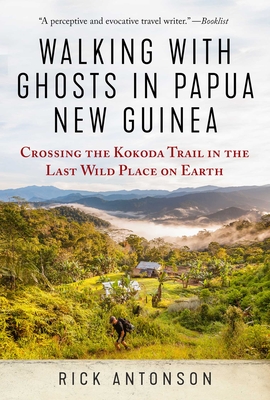 Walking with Ghosts in Papua New Guinea: Crossing the Kokoda Trail in the Last Wild Place on Earth (Hardcover)


This book may be available, use the button below to request more information from our team.
Acclaimed travel writer Rick Antonson (Full Moon Over Noah’s Ark) tackles his most challenging adventure yet: a formidable trail through the remote jungles of Papua New Guinea.

Rick Antonson has traveled to parts of the world that are not simply exotic but sometimes damned near inaccessible. He has climbed to the summit of Mount Ararat in eastern Turkey, traveling beyond to Iraq and Iran and Armenia. He has undertaken an improbable overland journey to the ancient city of Timbuktu, an enlightening look into efforts to preserve the city’s priceless manuscripts. Now he has traversed the notorious Kokoda Trail in Papua New Guinea, a country some call “the last wild place on earth.”

The trail is a narrow, 60-mile footpath featuring rough jungle, 6,000 feet in elevation change, and punishing weather extremes. In a country unfairly locked in Western misperceptions, the track is inhospitable terrain yet home to hospitable indigenous peoples, who live among the rusting reminders of the Japanese, Australian, and American armies that clashed in some of the deadliest protracted combat of World War II.

In Walking With Ghosts in Papua New Guinea, Antonson shares a journey of physical and mental endurance in his inimitable way, in the company of a mixed band of resolute adventurers, blending fascinating historical context with the tribulations of unexpected discoveries in faraway lands.

Rick Antonson is the author of Route 66 Still Kicks: Driving America's Main Street, To Timbuktu for a Haircut: A Journey Through West Africa, Full Moon Over Noah's Ark: An Odyssey to Mount Ararat, and Walking With Ghosts in Papua New Guinea: Crossing the Kokoda Trail in the Last Wild Place on Earth. Rick is a past chair of Destination International, based in Washington, D.C. and past deputy chair of the Pacific Asia Travel Association based in Bangkok, and the former president and CEO of Tourism Vancouver. He and his wife Janice live in Predator Ridge in Canada’s Okanagan Valley.
"Walking With Ghosts In Papua New Guinea is among the best travel narratives I have read. Rick Antonson beautifully creates a sense of the environment in New Guinea as well as the local people he encountered. He effortlessly weaves in the dramatic wartime history of the Kokoda Trail as his party treks across rushing streams and up and down the mountainous terrain. I highly recommend this book to armchair travelers anxious to experience life in a truly wild, and in many ways primitive, world."
—James P. Duffy, author of War at the End of the World

Praise for Rick Antonson
"Antonson is an evocative and perceptive travel writer."
—Booklist

“It’s not just about the journey, or standard travel writing. It’s about story-telling, and Rick takes us on a magical, almost mystical adventure to destinations once only shrouded in mythology.”
—Peter Greenburg, travel editor, CBS News, on Full Moon Over Noah’s Ark

“The remarkable combination of Rick Antonson exploring the ancient mysteries of Timbuktu matched with the rich culture of Mali that he captures so well . . . makes a page-turner from start to finish.”
—Jerry W. Bird, editor, Africa Travel Magazine on To Timbuktu for a Haircut

“One of the best books of the bunch.”
—The New York Times, 2012 holiday travel book roundup on Route 66 Still Kicks