Bad Rabbi: And Other Strange But True Stories from the Yiddish Press (Stanford Studies in Jewish History and Culture) (Paperback) 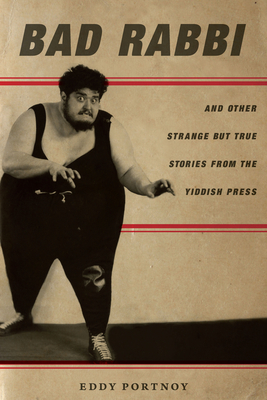 Bad Rabbi: And Other Strange But True Stories from the Yiddish Press (Stanford Studies in Jewish History and Culture) (Paperback)

Stories abound of immigrant Jews on the outside looking in, clambering up the ladder of social mobility, successfully assimilating and integrating into their new worlds. But this book is not about the success stories. It's a paean to the bunglers, the blockheads, and the just plain weird--Jews who were flung from small, impoverished eastern European towns into the urban shtetls of New York and Warsaw, where, as they say in Yiddish, their bread landed butter side down in the dirt. These marginal Jews may have found their way into the history books far less frequently than their more socially upstanding neighbors, but there's one place you can find them in force: in the Yiddish newspapers that had their heyday from the 1880s to the 1930s. Disaster, misery, and misfortune: you will find no better chronicle of the daily ignominies of urban Jewish life than in the pages of the Yiddish press.

An underground history of downwardly mobile Jews, Bad Rabbi exposes the seamy underbelly of pre-WWII New York and Warsaw, the two major centers of Yiddish culture in the late nineteenth and early twentieth centuries. With true stories plucked from the pages of the Yiddish papers, Eddy Portnoy introduces us to the drunks, thieves, murderers, wrestlers, poets, and beauty queens whose misadventures were immortalized in print. There's the Polish rabbi blackmailed by an American widow, mass brawls at weddings and funerals, a psychic who specialized in locating missing husbands, and violent gangs of Jewish mothers on the prowl--in short, not quite the Jews you'd expect. One part Isaac Bashevis Singer, one part Jerry Springer, this irreverent, unvarnished, and frequently hilarious compendium of stories provides a window into an unknown Yiddish world that was.

Eddy Portnoy is Senior Researcher and Director of Exhibitions at the YIVO Institute for Jewish Research.