North: Finding My Way While Running the Appalachian Trail (CD-Audio) 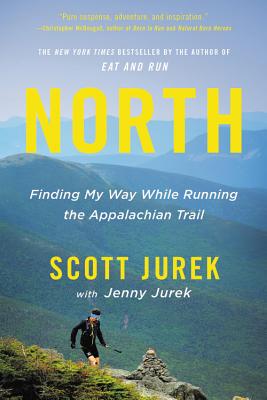 North: Finding My Way While Running the Appalachian Trail (CD-Audio)

By Jenny Jurek (With), Scott Jurek


This book may be available, use the button below to request more information from our team.
From the author of the bestseller Eat and Run, a thrilling memoir about his grueling, exhilarating, and immensely inspiring 46-day run to break the speed record for the Appalachian Trail.

Scott Jurek is one of the world's best known and most beloved ultrarunners. Renowned for his remarkable endurance and speed, accomplished on a vegan diet, he's finished first in nearly all of ultrarunning's elite events over the course of his career. But after two decades of racing, training, speaking, and touring, Jurek felt an urgent need to discover something new about himself. He embarked on a wholly unique challenge, one that would force him to grow as a person and as an athlete: breaking the speed record for the Appalachian Trail.

North is the story of the 2,189-mile journey that nearly shattered him. When he set out in the spring of 2015, Jurek anticipated punishing terrain, forbidding weather, and inevitable injuries. He would have to run nearly 50 miles a day, every day, for almost seven weeks. He knew he would be pushing himself to the limit, that comfort and rest would be in short supply -- but he couldn't have imagined the physical and emotional toll the trip would exact, nor the rewards it would offer.

With his wife, Jenny, friends, and the kindness of strangers supporting him, Jurek ran, hiked, and stumbled his way north, one white blaze at a time. A stunning narrative of perseverance and personal transformation, North is a portrait of a man stripped bare on the most demanding and transcendent effort of his life. It will inspire runners and non-runners alike to keep striving for their personal best.
Scott Jurek, one of the greatest runners of all time, has claimed multiple victories in the historic 153-mile Spartathlon, the Hardrock Hundred, the Badwater 135-Mile Ultramarathon, and the Western States 100-Mile Endurance Run, which he won a record seven straight times, among many others.

He has also been named a National Geographic Adventurer of the Year and one of Sports Illustrated's Fittest 50. The New York Times bestselling author of Eat and Run and a main character in the book Born to Run, Jurek has been featured in the New York Times, CNN, USA Today, Wall Street Journal, TIME, and ESPN Magazine. A passionate vegan, he lives in the mountains of Boulder, Colorado with his wife, Jenny, and daughter, Raven.
"Pure suspense, adventure, and inspiration. When Scott Jurek went into the woods to create his masterpiece, no one knew if he would make it back out again. He was America's greatest ultra athlete, a runner whose brains and singular intensity led him to years of extraordinary victories. But this time, Jurek was pushing himself into realms more dangerous than Death Valley, more treacherous than Mexican canyons, and only slightly less crazy than the time he chased after a wild bear. His story of plunging into the wilderness in pursuit of a dream is both heartwrenching and spellbinding."—Christopher McDougall, author of Born to Run and Natural Born Heroes

"Scott Jurek's record-setting journey on the Appalachian Trail was the most punishing, most demanding, most grueling feat I've ever personally witnessed. By mile 2,000, he was a hollowed-out, broken-down carapace of a person. And unless he found something, some way not just to keep going but to speed up, he was going to miss the record. Over those final 200 miles, I watched him dig deeper than I thought humanly possible: he not only claimed the fastest known time, but - most impressively - never failed to greet a fellow blaze-hiker with a smile and a cheery, 'How far ya' going?' Now, reading his immersive and engaging book, where he asks and pushes himself to find the answers to all of the 'whys,' I almost don't want his suffering to end, just so I can enjoy another chapter."
—Aron Ralston, adventurer and author of 127 Hours: Between a Rock and a Hard Place

"When Scott first shared with me that the AT would be his next record setting challenge, I was in awe at the stamina it would require and the precision in planning and preparation that it would ultimately entail. Scott, and Jenny, are both living proof that what you dream you can also make manifest. Read this book and redefine your own personal limits."
—Christy Turlington Burns, Founder & CEO Every Mother Counts

"What sucks you in is the fact that the Jureks' daily struggles matter. Their candid sharing of each day's minutia places you on the trail alongside them."—American Trail Running Association

"North chronicles the highs and lows of an epic journey, both inward and outward."—New York Post

"North will cement Jurek's position and reputation. It is a heartfelt, honest, exciting account of an inner, metaphorical journey."—The Daily Camera

"Like his first book, Eat and Run, Jurek's journey is nothing less than inspirational."