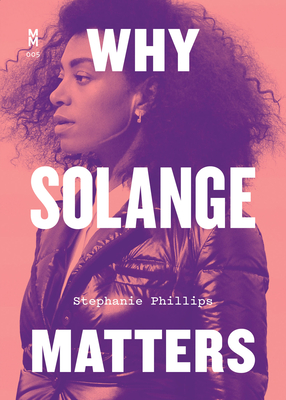 Growing up in the shadow of her superstar sister, Solange Knowles became a pivotal musician in her own right. Defying an industry that attempted to bend her to its rigid image of a Black woman, Solange continually experimented with her sound and embarked on a metamorphosis in her art that continues to this day.

In Why Solange Matters, Stephanie Phillips chronicles the creative journey of an artist who became a beloved voice for the Black Lives Matter generation. A Black feminist punk musician herself, Phillips addresses not only the unpredictable trajectory of Solange Knowles's career but also how she and other Black women see themselves through the musician's repertoire. First, she traces Solange’s progress through an inflexible industry, charting the artist’s development up to 2016, when the release of her third album, A Seat at the Table, redefined her career. Then, with A Seat at the Table and 2019’s When I Get Home, Phillips describes how Solange embraced activism, anger, Black womanhood, and intergenerational trauma to inform her remarkable art. Why Solange Matters not only cements the place of its subject in the pantheon of world-changing twenty-first century musicians, it introduces its writer as an important new voice.

Stephanie Phillips is a London-based music journalist and musician who writes for The Quietus, She Shreds, Noisey, Bandcamp, and The Wire. She started the Black feminist punk band Big Joanie and played backup for Bikini Kill and Sleater-Kinney. She is also part of the collective behind Decolonise Fest, a festival celebrating punks of color.

Singer and author share a story as Black women moving through spaces that weren’t built with them in mind. Why Solange Matters asks not only who Solange is, or who Stephanie Phillips is, but who Black people are and what they can be...This is a book about what freedom could look like for Black women, in which Phillips provides a framework, a vision of a new world, one she hopes Solange would be proud to be a part of.
— The Guardian

Phillips makes a convincing case for the singer-songwriter Solange as one of our most important and ambitious chroniclers of Black womanhood.
— The Atlantic

Phillips analyzes Solange's musical evolution and connects the dots between the music and her experiences as a Black British woman...In less than 250 pages, Phillips celebrates and humanizes a woman whose artistic and personal milestones allowed the author's 'Black girl weirdo self a space to exhale.'
— National Catholic Reporter

[Phillips] does a great job at zooming out and considering all aspects of Solange’s artistic journey to stardom, including her childhood...[Phillips'] vibrant writing reminds us how Solange lit 'the flame of creativity' within many Black women, reminding us that society’s expectations continue to be limiting. Long live 'kooky' Black artistry.
— gal—dem

Why Solange Matters is a love letter to outsider music nerds, but especially to Black women, who continually have their tastes, talents, hearts, bodies, and minds suppressed by 'the limited imagination of the white mainstream.' The book is a call to action — embrace yourself, embrace those who are hurting alongside you, and be brave.
— Sightlines

Phillips...finds common ground in the struggles of the Houston icon, insightfully recounting the rise of Beyoncé's little sister.
— Austin Chronicle

This University of Texas Press series has a strong premise, and among its titles released to date none has done a better job of fulfilling its mandate than Stephanie Phillips’s tribute to this dynamic artist.
— The Current, "Best Music Books of 2021"

Why Solange Matters is equal parts memoir, biography and music criticism...Some of the richest writing in Why Solange Matters is about Phillips’s own life, her family, her relationship to Britishness, and the feeling of being a ‘teenage Black girl weirdo’ growing up liking music she wasn’t supposed to and ‘rarely seeing depictions of beauty that looked like me’. At one point she says that the person Solange most reminds her of is Kate Bush, and it’s this kind of sparky detail that makes her book much more than a dry thesis and at times something nearer to personal reverie: an extended reflection on what she and Solange have in common, and what they don’t.
— London Review of Books

Solange is a modern day icon, a cultural figure whose reach extends far beyond her slim but potent discography. Why Solange Matters is Stephanie Phillips’ examination of her work, but it quickly expands beyond this to tackle Blackness, womanhood, misogynoir, the essence of creativity and more...Why Solange Matters removes digital gloss to look at the person underneath, her motivations and aesthetic, all while offering a personal slant on the meaning of an icon.
— Clash Music, "Best Music Books of 2021"

We love Solange for being an inspirational and pivotal musician. And in Why Solange Matters we see her celebrated as a force for liberating Black female creatives. Author and Black feminist punk musician Stephanie Phillips looks at how Solange embraced activism and anger, breaking free from the limits placed on her as a performer of colour – and how she’s led the way for others to do the same.
— London on the Inside

In Why Solange Matters, Phillips analyzes the singer’s progressive musical evolution from once being in the shadow of older sister and music icon Beyoncé to massive personal milestones, and intertwines Solange’s journey with her own experiences enduring generational trauma and institutionalized racism in the United Kingdom.
— Teen Vogue