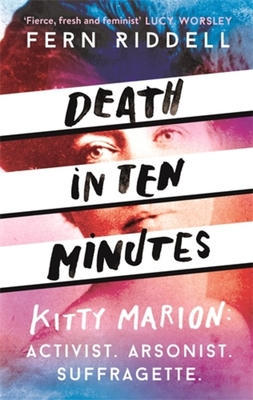 WOMEN WERE NEVER GIVEN THE RIGHT TO VOTE . . . THEY TOOK IT BY FORCE, BY ANY MEANS NECESSARY.
BUT WHY HAS THE RADICAL LEGACY OF THE SUFFRAGETTES BEEN ERASED FROM HISTORY?

In Death in Ten Minutes, historian Fern Riddell uncovers the story of radical suffragette Kitty Marion, told through never-before-seen personal diaries in Kitty's own voice.
In the early twentieth century, women in the UK and the US were fighting for the vote using any means necessary. Kitty Marion was sent on a mission by the family of Emmeline Pankhurst, founders of the leading militant organization for women's suffrage in the UK: to carry out a nationwide campaign of bombings and arson attacks in support of their goals. Kitty's subsequent arrests and force-feedings while in prison put her on a path of dedicated radical activism, leading her across the ocean to New York City, where she joined Margaret Sanger in advocating for birth control.

But in the aftermath of World War I, the dangerous and revolutionary actions of Kitty and other militant suffragettes were quickly hushed up and disowned by the feminist movement, and the women who carried out these attacks were erased from our history. Now, for the first time, their untold story will be brought back to life.

Dr. Fern Riddell is a historian specializing in sex, suffrage, and culture in the Victorian and Edwardian eras. She appears regularly on TV and radio, writes for the Guardian, Huffington Post, Telegraph, and Times Higher Education, and is a columnist for BBC History Magazine.

"Death In Ten Minutes is an insightful and important read because it gives an unrestricted account of how women forcibly demanded their right to vote."
—Pacific Standard


"Riddell (The Victorian Guide to Sex) returns with the oft-overlooked story of Kitty Marion (1871-1944) and the suffragettes that history often forgets...One such woman is Marion, and Riddell does a wonderful job of bringing her and the period of the turn of the 20th century to life. Marion, who employed arson and bombings to make her case, was instrumental in the cause for women's rights in both Britain and this country, enduring multiple forced-feedings during her imprisonments. For a woman who sacrificed so much, history has shared so little of her. Riddell is changing that."
—Library Journal


"Subsequent generations of women's-rights activists, in attempts to sanitize the suffragette movement and distance themselves from birth-control controversies, have often elected to overlook Marion's contributions and write her out of historical accounts. This engaging offering sets the record straight."
—Booklist

"A compelling, passionate, and timely account of a fierce and extraordinary woman. In 2018, Kitty Marion's story is required reading."—Helen Castor, author of She-Wolves: The Women Who Ruled England Before Elizabeth

"A brilliant political biography of the dangerous, dramatic, and uncompromisingly political life of an incredible woman. Viscerally written, this book is a powerful reminder that women were not given the vote, they demanded it and took it by force as much as by persuasion."—David Olusoga, author of Black and British: A Forgotten History

"Riddell has brought to life the drama and tension of suffragette attacks in early-twentieth-century Britain. Never before have I thought of the noise, color, sounds, smells, and sensations of fighting for women's rights to the vote, and to sexual and legal freedoms. She creates a textured tapestry of bustling streets and a myriad of personalities, amidst which devastating bomb attacks are given a potency so often eroded from history books. The world needs more books like this--books that challenge where we are now, and the brave, dangerous, fascinating women who got us here."—Janina Ramirez, Oxford University

"The tale this book tells is as explosive as its title. Riddell's vivid prose follows this unsung heroine in her fight for birth control and suffrage."—The Independent

"An exhilarating slice of incredibly relevant history. Highly recommended."—Matt Haig, author of How to Stop Time

Our storefront is currently closed to the public, but we are doing curbside and walk-up pickup from 4-7pm Tues-Thurs, 4-6pm Fri, 11-1pm Sat.

We are in the store and answering the phone somewhat intermittently; leave us a message and we'll get back to you as soon as we can.