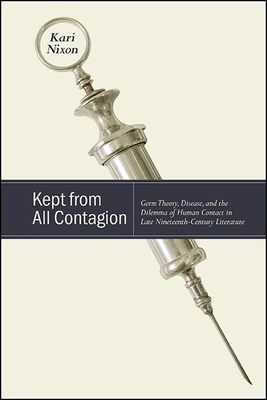 
Not Currently On Our Shelves. Usually Ships in 1-5 Days
Kept from All Contagion explores the surprising social effects of germ theory in the late nineteenth century. Connecting groups of authors rarely studied in tandem by highlighting their shared interest in changing interpersonal relationships in the wake of germ theory, this book takes a surprising and refreshing stance on studies in medicine and literature.

Each chapter focuses on a different disease, discussing the different social policies or dilemmas that arose from new understandings in the 1860s-1890s that these diseases were contagious. The chapters pair these sociohistorical considerations with robust literary analyses that assess the ways authors as diverse as Thomas Hardy, Henrik Ibsen, and Mary Elizabeth Braddon, among others, grappled with these ideas and their various impacts upon different human relationships--marital, filial, and social.

Through the trifocal structure of each chapter (microbial, relational, and sociopolitical), the book excavates previously overlooked connections between literary texts that insist upon the life-giving importance of community engagement--the very thing that seemed threatening in the wake of germ theory's revelations. Germ theory seemed to promote self-protection via isolation; the authors covered in Kept from All Contagion resist such tacit biopolitical implications. Instead, as Kari Nixon shows, they repeatedly demonstrate vitalizing interpersonal interactions in spite of--and often because of--their contamination with disease, thus completely upending both the ways Victorians and present-day literary scholars have tended to portray and interpret purity.
Kari Nixon is Assistant Professor of Literature at Whitworth University and the coeditor (with Lorenzo Servitje) of Endemic: Essays in Contagion Theory.