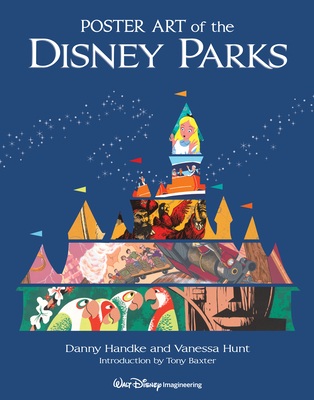 
Not Currently On Our Shelves. Usually Ships in 1-5 Days
A lush compendium of posters from Disney theme parks around the globe, along with concept art and lively narrative about the development of the stunning posters!

Anyone who has ever walked through the gates at a Disney Park knows that there is a magical experience waiting to be had on the other side. All of the telltale signs are there: the sound of joyful music pipes across the promenade; the smells of popcorn and cookies waft through the air; and the colorful attraction posters depict all the wonderful rides and shows created for Guests by the Imagineers. Poster Art of the Disney Parks is a tribute to those posters.

Disney attraction posters have been an important means of communication since Disneyland began displaying them in 1956. Not only are they eye-catching pieces of artwork that adorn the Parks with flair and style, they are also displayed to build excitement and disseminate information about the newest additions to the Disney landscape. When the first attraction posters made their debut at Disneyland, one such piece of art proclaimed that Guests could have a “true-life adventure” on the Jungle Cruise.

As evidenced by the evolution of the attraction posters, art styles and design techniques have certainly changed over the years. These characteristics also differ from continent to continent. Posters from Tokyo Disneyland, Disneyland Paris, and Hong Kong Disneyland exhibit the nuances in presentation that give each Park’s pantheon of posters its signature look. But while artistic interpretations and color palettes may vary from Park to Park and from year to year, the spirit of Disney storytelling is a constant that ties them all together.

Searching for that perfect gift for the Disney theme park fan in your life? Explore more archival-quality books from Disney Editions:
DANNY HANDKE makes the magic at Walt Disney Imagineering as an Associate Show Producer for the Tokyo Disney Resort, Disney Cruise Line, and Hong Kong Disneyland portfolios. His creative talents have been utilized on many exciting projects and attractions worldwide, including Goofy’s Paint ‘n’ Play House and Monsters, Inc. Ride & Go Seek! at Tokyo Disneyland; Mickey & Friends’ Greeting Trails and Village Greeting Place at Tokyo DisneySea; Goofy Golf on the Disney Dream; AquaLab on the Disney Fantasy; and numerous other attractions unannounced at this time. He also designed an attraction poster for Mr. Toad’s Wild Ride that is currently being showcased in Disneyland Park.

VANESSA HUNT is a Walt Disney Imagineer and a lifelong Disney aficionado. Her education is in art history, and she is part of the group responsible for the more than 160,000 pieces of original artwork preserved in the Walt Disney Imagineering Art Collection. She has been curator of several Imagineering exhibits featuring many of the works from the Art Library collection, and has consulted for The Walt Disney Family Museum. Vanessa is also the coauthor of the wildly popular Poster Art of the Disney Parks (2012) and Maps of the Disney Parks (2016) as well as the designer on Marc Davis in His Own Words: Imagineering the Disney Theme Parks (2019).