Tell No Tales: Pirates of the Southern Seas (Paperback) 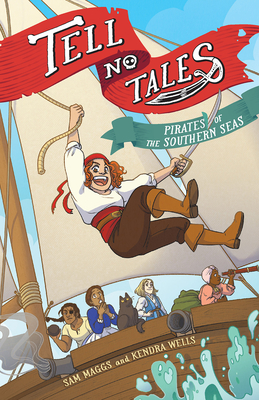 Tell No Tales: Pirates of the Southern Seas (Paperback)

Anne Bonny had it all—her own ship, a pirate crew, and a fearsome reputation—but a new enemy has her on the run and it’ll take all of Anne’s courage to stay afloat. The night before a major heist, Anne has an unsettling dream, and come morning, the robbery is thwarted by Woodes Rogers, a zealot who has sworn to eliminate piracy. With no plan to escape, Anne must persuade her crew to seek the meaning of her dream—or perish. Full of sass, solidarity, and swordplay, Tell No Tales is a graphic novel about belonging, belief, and how far we’re willing to go to protect the ones we love.

Sam Maggs is a bestselling writer of books, comics, and video games. She’s the author of The Fangirl’s Guide to the Galaxy, and Girl Squads, and has written for comics such as Star Trek and Jem and the Holograms. Maggs is a Canadian currently living in Los Angeles. Kendra Wells is an illustrator, comics artist, colorist, and designer living in Brooklyn. Their clients include The Nib, The New Yorker, and others.