Nothing but the Night: Leopold & Loeb and the Truth Behind the Murder That Rocked 1920s America (Hardcover) 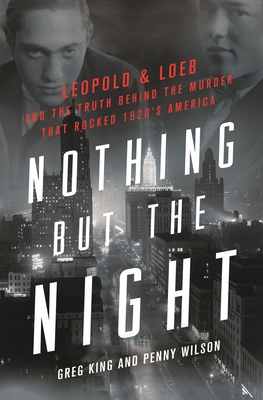 Nothing but the Night: Leopold & Loeb and the Truth Behind the Murder That Rocked 1920s America (Hardcover)

Greg King and Penny Wilson turn the original crime of the century on its head in Nothing But the Night, a riveting new exploration of the murder trial of Leopold & Loeb.

Nearly a hundred years ago, two wealthy and privileged teenagers—Nathan Leopold and Richard Loeb—were charged and convicted in a gruesome crime that would lead to the original “Trial of the Century”. Even in Jazz Age Chicago, the murder was uniquely shocking for the motive of the killers: well-to-do Jewish scions, full of promise, had killed fourteen-year-old Bobby Franks for the thrill of it. The trial was made even more sensational by the revelation of a love affair between the defendants and by defense attorney Clarence Darrow, who delivered one of the most famous defense summations of all time to save the boys from the death penalty. The story of their mad folie à deux, with Loeb portrayed as the psychopathic mastermind and Leopold as his infatuated disciple, has been endlessly repeated and accepted by history as fact. And none of it is true.

Using twenty-first century investigative tools, forensics, and a modern understanding of the psychology of these infamous killers, Nothing but the Night turns history on its head. While Loeb has long been viewed as the architect behind the murders, King and Wilson’s new research points to Leopold as the dominant partner in the deadly relationship, uncovering a dark obsession with violence and sex. Nothing but the Night pulls readers into the troubled world of Leopold and Loeb, revealing a more horrifying tale of passion, obsession, and betrayal than history ever imagined.

Greg King is the author of many internationally published works of history, including The Last Voyage of the Andrea Doria. His work has appeared in the Washington Post, Majesty Magazine, Royalty Magazine and Royalty Digest. He lives in the Seattle area.

Penny Wilson is the author of Lusitania and The Last Voyage of the Andrea Doria with Greg King and several internationally published works of history on late Imperial Russia. Her historical work has appeared in Majesty Magazine, Atlantis Magazine, and Royalty Digest. She lives in Southern California with her husband and three Huskies.

“Greg King and Penny Wilson do a masterful job of capturing the personalities of both the killers and the victim, the atmosphere of the times, the courtroom drama, and the final years of Leopold.” --AirMail

“[Reveals] new dimensions to the horrifying crime and [offers] evidence that what we think we've known all along might not have been the entire story.” –Town & Country

“An intriguing deep dive into the horrific 1924 murder of 14-year-old Bobby Franks in Chicago...a disturbing and well-documented look at one of the 20th century’s most infamous murders.” –Publishers Weekly

“Nothing but the Night is a fascinating retelling of an intriguing chapter in American legal history.” –New York Journal of Books

“Offers true-crime fans some new angles to consider. A worthy addition to the voluminous literature on this famous case.” –Booklist

“[King and Wilson's] examination is thorough, and their account is well-researched.” --BookReporter

“[King and Wilson] have succeeded marvelously, offering up a lucid and entertaining historical portrait.” —The Wall Street Journal for Twilight of Empire

“A compelling and readable account of the private life of the imperial family headed for doom.” —Seattle Post-Intelligencer for The Assassination of the Archduke

“Highly informed, compellingly written...there was a great deal more to the story than its heart-wrenching tragedy.” —The Wall Street Journal for Lusitania

"[A] fine example of historical detective work by the always-entertaining and-enlightening King-and-Wilson duo." —Booklist for Twilight of Empire

“An entertaining challenge to a century of misconceptions.”—Kirkus Reviews for The Assassination of the Archduke

"A solid, fascinating account of a ship, its passengers, and its terrible fate.” —Publishers Weekly for Lusitania