Blue: The Color of Noise (Hardcover) 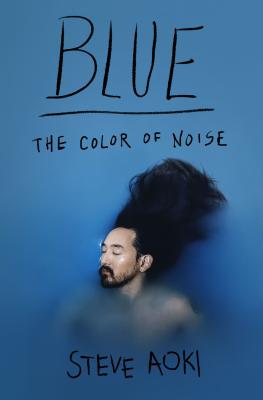 Blue: The Color of Noise (Hardcover)

The music. The mix. His life.

"Sometimes I think my whole life can be seen through shades of blue..." —Steve Aoki

Blue is the remarkable story—in pictures and words—of Steve Aoki, the superstar DJ/producer who started his career as a vegan straightedge hardcore music kid hellbent on defying his millionaire father, whose unquenchable thirst to entertain—inherited from his dad, Rocky Aoki, founder of Benihana—led him to global success and two Grammy nominations.

Ranked among the top ten DJs in the world today, Grammy-nominated artist, producer, label head, fashion designer, philanthropist and entrepreneur Steve Aoki is an authentic global trendsetter and tastemaker who has been instrumental in defining contemporary youth culture. Known for his outrageous stage antics (cake throwing, champagne spraying, and the ‘Aoki Jump’) and his endearing personality, Steve is also the brains behind indie record label Dim Mak, which broke acts such as The Kills, Bloc Party, and The Gossip. Dim Mak also put out the first releases by breakout EDM stars The Chainsmokers and The Bloody Beetroots, as well as the early releases for Grammy-nominated artist Iggy Azalea, in addition to EDM star Zedd and electro duo MSTRKFT.

In Blue, Aoki recounts the epic highs of music festivals, clubs and pool parties around the world, as well as the lows of friendships lost to drugs and alcohol, and his relationship with his flamboyant father. Illustrated with candid photos gathered throughout his life, the book reveals how Aoki became a force of nature as an early social media adopter, helping to turn dance music into the phenomenon it is today. All this, while remaining true to his DIY punk rock principles, which value spontaneity, fun and friendship above all else—demonstrable by the countless cakes he has flung across cities worldwide.

STEVE AOKI is an American electro house musician, record producer, DJ, and music executive. He has collaborated with artists such as will.i.am, Afrojack, LMFAO, Linkin Park, Iggy Azalea, Lil Jon, Laidback Luke, BTS, Louis Tomlinson, Rise Against, Vini Vici, and Fall Out Boy, and is known for his remixes of artists such as Kid Cudi. Aoki has released several Billboard-charting studio albums as well, notably Wonderland, which was nominated for Grammy Award for Best Dance/Electronica Album in 2013. He was born in Miami, FL, and grew up in Newport Beach, CA, and is the founder of the Steve Aoki Charitable Fund, which raises money for global humanitarian relief organizations.

DANIEL PAISNER is the author or co-author of more than sixty books, including sixteen New York Times bestsellers. As a ghostwriter, he has collaborated with such leading personalities as tennis great Serena Williams; football legend Ray Lewis; two-term Ohio governor John Kasich; Academy Award-winning actors Denzel Washington, Whoopi Goldberg and Anthony Quinn; and, former world-champion longboard surfer Izzy Paskowitz. He is the winner of two NAACP Image Awards for his work with Shark Tank panelist and serial entrepreneur Daymond John. His novel A Single Happened Thing was named an Indies Finalist as best book of the year (literary fiction) by the editors of Foreword Reviews, and his previous novel, Mourning Wood, and a non-fiction account of the aftermath of the historic home run race of 1998—The Ball: Mark McGwire's 70th Home Run Ball and the Marketing of the American Dream—both long out of print, were reissued in new digital and paperback editions.

"Aoki spins a smart, lively tale of the power of music to connect people with each other. ...[A] passionate, introspective memoir." —Publishers Weekly

"Aoki has been named as one of the highest paid DJs. Known for his remixes of artists such as Kid Cudi and collaborations with a wide range of musical talents including will.i.am, Afrojack, Iggy Azalea, and Linkin Park, he’s also a Grammy-nominated artist in his own right." —Entertainment Weekly

“A compelling memoir of cultural and self-discovery that led to phenomenal success. ...Inspiring.” —Booklist

“For over two decades, Aoki has been a disruptive trailblazer in music, fashion and lifestyle. Kicking off his career by providing a platform for bands and throwing rock concerts in his living room, his expansive enterprise has evolved to include a thriving record label, leading apparel brand and celebrated run as one of the most prominent EDM DJ’s in the world.” —Forbes

“He's a tastemaker, for real.” —Rolling Stone, “50 Most important People in EDM”