Mightier Than the Sword: A Novel (The Clifton Chronicles #5) (Paperback) 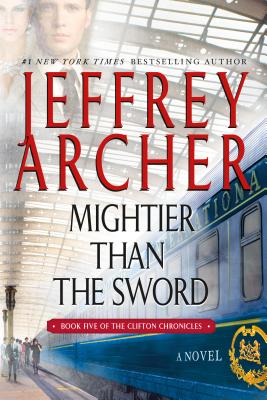 Mightier Than the Sword: A Novel (The Clifton Chronicles #5) (Paperback)

This is book number 5 in the The Clifton Chronicles series.

With more than 2 million copies in print, the Clifton Chronicles has taken #1 worldwide bestselling author Jeffrey Archer to a whole new level. And the saga continues with Mighter Than the Sword.

Bestselling novelist Harry Clifton's on a mission to free a fellow author who's imprisoned in Siberia-even if doing so puts Harry's own life, and life's work, in danger. Meanwhile, his wife Emma, chairman of Barrington Shipping, is facing the repercussions of an IRA bombing on the Buckingham. Some board members feel she should resign. Others will stop at nothing to ensure the Clifton family's fall from grace. In London, Harry and Emma's son, Sebastian, is quickly making a name for himself at Farthing's Bank. He's also just proposed to a beautiful young American, Samantha. But the despicable Adrian Sloane is only interested in one thing: Sebastian's ruin.

Sir Giles Barrington, now a minister of the Crown, looks set for even higher office-until a diplomatic failure in Berlin threatens his prospects. Once again it appears that Giles's political career is thrown off balance by none other than his old adversary, Major Alex Fisher. But who will win the election this time? And at what cost?

JEFFREY ARCHER was educated at Oxford University. He served five years as a Member of Parliament in the House of Commons and has served twenty-seven years as a Member of the House of Lords. Now published in 97 countries and more than 37 languages, all of his novels and short story collections—including Kane & Abel, Only Time Will Tell and This Was a Man—have been international bestsellers. Jeffrey is married with two sons and three grandchildren, and lives in London, Cambridge and Majorca.

“One of the top ten storytellers in the world.” —Los Angeles Times

“A storyteller in the class of Alexander Dumas…Unsurpassed skill…making the reader wonder intensely what will happen next.” —The Washington Post