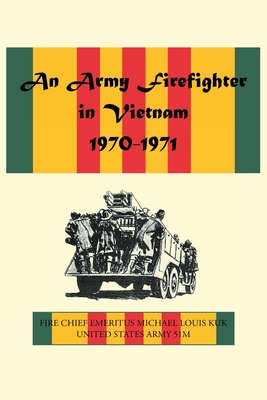 Military history continues to evolve and grow. Every conflict that had American troops on the ground is full of historical notice and activity, and the Vietnam War is no exception.

Chief Michael L. Kuk's writing tells of the time that he spent in Vietnam with the US army as a combat firefighter. This work encompasses what a very small detail of soldier-firefighters did while they were stationed there in support of the overall war effort.

It wasn't a glamourous war-hero position. But it required bravery and courage to face and overcome other hazards the war could present. A misstep would result in serious injury and/or death if these soldier-firefighters did not perform to the highest standard so required.

The events of this book tell his story in a matter-of-fact manner. No Hollywood limelight, just a hard, factual retrospect of young American soldiers doing the right thing at the right time, to save and protect the US military's assets and personnel in a remote part of the world.

The photographs alone tell a more detailed story, as documentation of fire apparatus and their response personnel are rarely captured on film in any theater of war, much less noted at all.

The return of a welcome home for many Vietnam veterans was disgraceful. Finally, America is thankful for their service and sacrifices. Fortunately, many are now sharing their stories about their contribution. This book will tell a new chapter about the Vietnam War and its soldiers.

One has to feel proud that these Vietnam War veterans never forgot their patriotism.