Moon In a Dewdrop: Writings of Zen Master Dogen (Paperback) 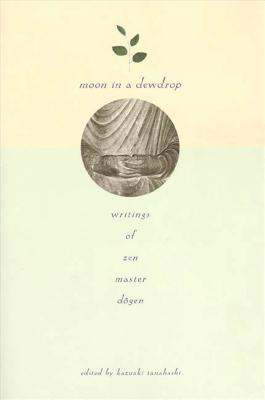 Moon In a Dewdrop: Writings of Zen Master Dogen (Paperback)

Eihei Dogen (1200-1253), among the first to transmit Zen Buddhism from China to Japan and founder of the important Soto School, was not only a profoundly influential and provocative Zen philosopher but also one of the most stimulating figures in Japanese letters.

Kazuaki Tanahashi, collaborating with several other Zen authorities, has produced sensitive and accurate translations of Dogen's most important texts. Moon in a Dewdrop contains the key essays of the great master, as well as extensive background materials that will help Western readers to approach this significant work. There is also a selection of Dogen's poetry, most of which has not appeared in English translation before.

Dogen's thought runs counter to conventional logic, employing paradoxical language and startling imagery. It illuminates such fundamental concerns as the nature of time, existence, life, death, the self, and what is beyond self.

Eihei Dogen was a thirteenth century Japanese Zen Buddhist teacher and founder of the Soto school of Zen. A selection of his writings are collected in Moon in a Dewdrop from Farrar, Straus and Giroux.

Robert Aitken (1917-2010) was Roshi of the Diamond Sangha in Honolulu and the author of Taking the Path of Zen and The Mind of Clover. His introduction to Zen came in a Japanese prison camp during World War II, after he was captured as a civilian in Guam. R. H. Blyth, author of Zen in English Literature, was imprisoned in the same camp, and in this unlikely setting Aitken began the first of several important apprenticeships. After the war Aitken returned often to Japan to study. He became friends with D. T. Suzuki, and studied with Nagakawa Soen Roshi and Yasutani Hakuun Roshi. In 1959 Robert Aitken and his wife, Anne, established a Zen organization, the Diamond Sangha. Aitken was given the title "Roshi" and authorized to teach by Yamada Koun Roshi in 1974.

“Moon in a Dewdrop is empty and clear at the same time, like the reflection of the moon in a drop of water.” —San Francisco Chronicle

“Kazuaki Tanahashi and his colleagues at the San Francisco Zen Center...have given us an accessible and comprehensive Dogen in English.” —Vajradhatu Sun