Russia and the Soviet Union: An Historical Introduction from the Kievan State to the Present (Paperback) 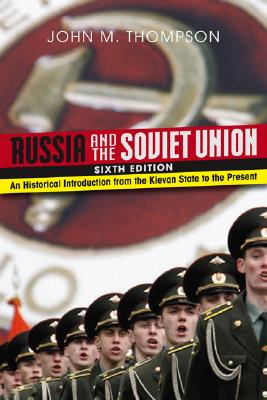 Russia and the Soviet Union: An Historical Introduction from the Kievan State to the Present (Paperback)


Backordered, maybe unavailable. Email or call for more details.
This lucid account of Russian and Soviet history presents major trends and events from ancient Kievan Rus' to Vladimir Putin's presidency of the twenty-first century. Now thoroughly revised and updated, Russia and the Soviet Union does not shy away from controversial topics, including the impact of the Mongol conquest, the paradoxes of Peter the Great, the inevitability of the 1917 Revolution, the Stalinist terror, and the Gorbachev reform effort. The sixth edition includes a new chapter on Vladimir Putin, additional treatment of social and foreign policy issues, and an updated chapter on post-Soviet Russia and the Yeltsin era. Distinguished by its brevity and amply supplemented with useful maps, illustrations, photos, and suggested readings, this essential text provides balanced coverage of all periods of Russian history and incorporates economic, social, and cultural developments as well as politics and foreign policy.

John M. Thompson, a graduate of Columbia's Russian Institute, taught history at Indiana University for seventeen years and was a distinguished visiting professor at the US Air Force Academy and the Air War College. He currently teaches Russian and world history at Midcoast Senior College in Maine.

"Comprehensive, balanced, up to date, engaging, and deftly written, Russia and the Soviet Union is the best brief history of Russia available today. The book is perfectly suited for use in introductory courses on Russian history and for general readers seeking to make sense of Russia over the centuries. Thompson has packed a lifetime of thoughtful reflection, teaching, and distinguished research into this volume."
-Donald J. Raleigh, University of North Carolina at Chapel Hill

"Through a fresh format and effective revisions, John Thompson has rendered still more succinct what was already a very neat, comprehensive and highly readable text. With updated biographies ('Further Reading') in several chapters and some new illustrations, as well as an additional chapter on Russia under the leadership of Vladimir Putin, Russia and the Soviet Union in its sixth edition remains a superlative text for both students of Russian history and the casual reader."
-Vicki Hendrickson Grove, University of Colorado, Boulder


"Russia and the Soviet Union is a superb one-semester text for a course in Russian history from origins to the near-present. Thompson does a judicious job of introducing key debates and does not hesitate to express his own considered opinion where warranted. The balanced coverage of medieval, early modern, modern, and contemporary periods is extremely important for introductory courses, as is the newly revised section of Russia under Putin. Overall, this is a readable, exciting, stimulating book which always has students asking for more."
-David W. McFadden, Fairfield University