Donnie Brasco: Unfinished Business: Shocking Declassified Details from the FBI's Greatest Undercover Operation and a Bloody Timeline of the Fall of the Mafia (paperback) (Paperback) 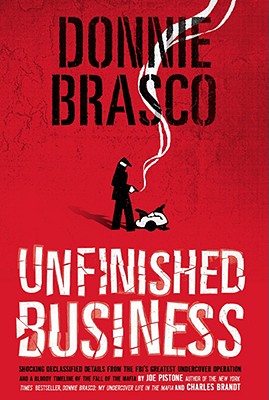 Donnie Brasco: Unfinished Business: Shocking Declassified Details from the FBI's Greatest Undercover Operation and a Bloody Timeline of the Fall of the Mafia (paperback) (Paperback)


Not Currently On Our Shelves. Usually Ships in 1-5 Days
When FBI Special Agent Joe Pistone began a "six-month" operation infiltrating New York's Bonanno crime family in 1975, he had no idea what was about to happen.
Posing as jewel thief "Donnie Brasco," Pistone spent the next six years undercover in the Family, witnessing-and sometimes participating in-the Mafia's gruesome activities while gathering enough evidence to send over 200 gangsters to jail. Pistone told his story in the 1988 book Donnie Brasco: My Undercover Life in the Mafia-a New York Times bestseller and later a feature film starring Johnny Depp and Al Pacino. But because of pending trials at the time of publication, many details of the alleged crimes were held back. Now, in Donnie Brasco: Unfinished Business, Pistone for the first time reveals with great detail the horrific deeds of wiseguys Tony Mirra, "Lefty" Ruggiero, Sonny Black, and the rest of the cold-blooded Bonanno crew. Pistone puts the operation into historical perspective, detailing the timeline of Mafia trials that crippled the New York City crime family over the past 25 years. He also recounts his experiences after the operation, his time on the Hollywood set with Pacino and Depp, and other undercover operations through present-day. A tense, thrilling account of the greatest infiltration ever by a federal agent into the most brutal gang of killers in the world, Donnie Brasco: Unfinished Business is the final chapter in the story of a real American hero.
Joseph D. Pistone is the legendary FBI Special Agent who put his life on the line to infiltrate the U.S. Mafia for six years, resulting in the convictions of over 200 mobsters. He lives in an undisclosed location.