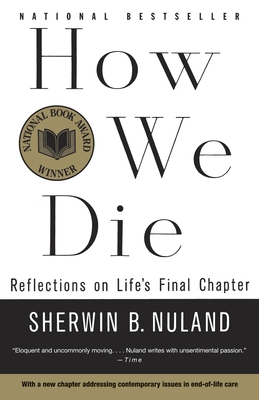 By Sherwin B. Nuland

Even more relevant than when it was first published, this edition addresses contemporary issues in end-of-life care and includes an all-embracing and incisive afterword that examines the state of health care and our relationship with life as it approaches its terminus. How We Die also discusses how we can take control of our own final days and those of our loved ones.

"Nuland's work acknowledges, with unmatched clarity, the harsh realities of how life departs… There is compassion, and often wisdom, in every page." —San Francisco Examiner

Sherwin B. Nuland, MD, was Clinical Professor of Surgery at Yale University until his retirement in 2009, though he continues to teach Biomedical Ethics and Medical History to Yale undergraduates, and serve the university in various capacities.  He won the National Book Award and was a finalist for the Pulitzer Prize and the Book Critics Circle Award when this book was initially published.  In hardcover and paperback, How We Die was on the New York Times bestseller list for a total of thirty-four weeks, and has been translated into twenty-nine languages.  Dr. Nuland and his family live in Connecticut.

"Engrossing… We are in the hands of a remarkable portraitist whose cultivated thought… quietly and informatively instructs and advises us on a subject of universal concern."- The New York Times Book Review

"Nuland's work acknowledges, with unmatched clarity, the harsh realities of how life departs… There is compassion, and often wisdom, in every page."- San Francisco Examiner

"Nuland combines the clinical eye of a physician with… emotional and philosophical reflectiveness."- Newsday