The Wives of Henry VIII (Paperback) 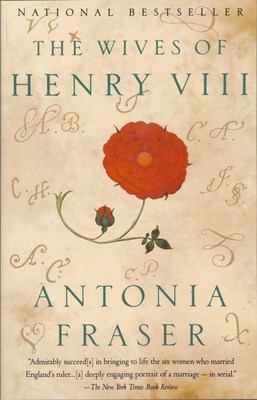 The Wives of Henry VIII (Paperback)


Not Currently On Our Shelves. Usually Ships in 1-5 Days
The New York Times bestselling history of the legendary six wives of Henry VIII--from the acclaimed author of  Marie Antoinette.

Under Antonia Fraser's intent scrutiny, Catherine of Aragon emerges as a scholar-queen who steadfastly refused to grant a divorce to her royal husband; Anne Boleyn is absolved of everything but a sharp tongue and an inability to produce a male heir; and Catherine Parr is revealed as a religious reformer with the good sense to tack with the treacherous winds of the Tudor court.  And we gain fresh understanding of Jane Seymour's circumspect wisdom, the touching dignity of Anna of Cleves, and the youthful naivete that led to Katherine Howard's fatal indiscretions.  The Wives of Henry VIII interweaves passion and power, personality and politics, into a superb work of history.
Antonia Fraser is the author of many internationally bestselling historical works, including Love and Louis XIV, Marie Antoinette, which was made into a film by Sofia Coppola, The Wives of Henry VIII, Mary Queen of Scots, Faith and Treason: The Story of the Gunpowder Plot, and Perilous Question: Reform or Revolution? Britain on the Brink, 1832. She is also the author of Must You Go? My Life with Harold Pinter. She has received the Wolfson Prize for History, the 2000 Norton Medlicott Medal of Britain’s Historical Association, and the Franco-British Society’s Enid McLeod Literary Prize. She was made a Dame of the British Empire for services to Literature in 2011.