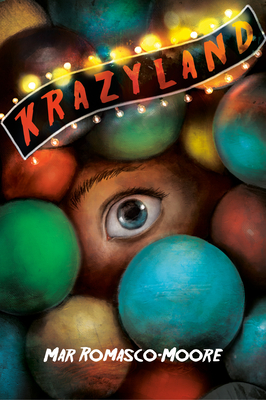 
On Our Shelves Now
In this scary story for fans of Neil Gaiman, The Last Kids on Earth, and Goosebumps, the only way out is krazier than you could ever imagine...

Nathan used to be terrified of Krazyland when he was a young kid.

Now that he's 12, the spooky-themed arcade games aren't that bad. He even enjoys stomping on plastic spiders and battling a creepy doll with big plastic eyes. But things become scarier again when kids start to go missing from the entertainment park...

There's another world exists beneath Kraztown's ball pit. A world where the entertainment park's games come to life. And if he isn't careful, Nathan is going to be the next one sucked under!


Mar Romasco-Moore is the YA author of I Am the Ghost in Your House and Some Kind of Animal, as well as Ghostographs, a collection of short stories paired with vintage photographs. Krazyland is her middle grade debut. She is also an instructor at Columbus College of Art and Design. To learn more follow @MarRomasco on Twitter.
"Romasco-Moore plunges readers right into the action, folding bits of backstory and exposition in along the way. Each of her short, punchy chapters ends on a cliffhanger, keeping pacing strong and comic suspense high."--Kirkus