The Worth of Water: Our Story of Chasing Solutions to the World's Greatest Challenge (Hardcover) 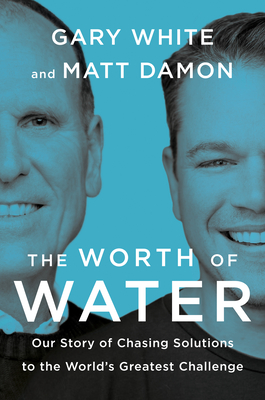 The Worth of Water: Our Story of Chasing Solutions to the World's Greatest Challenge (Hardcover)


Not Currently On Our Shelves. Usually Ships in 1-5 Days
From the founders of nonprofits Water.org & WaterEquity Gary White and Matt Damon, the incredible true story of two unlikely allies on a mission to end the global water crisis for good

On any given morning, you might wake up and shower with water, make your coffee with water, flush your toilet with water—and think nothing of it.

But around the world, more than three-quarters of a billion people can’t do any of that—because they have no clean water source near their homes. And 1.7 billion don’t have access to a toilet. This crisis affects a third of the people on the planet. It keeps kids out of school and women out of work. It traps people in extreme poverty. It spreads disease.

It’s also solvable. That conviction is what brought together movie actor Matt Damon and water expert and engineer Gary White. They spent years getting the answer wrong, then halfway right, then almost right. Over time, they and their organization, Water.org, have found an approach that works. Working with partners across East Africa, Latin America, South Asia, and Southeast Asia, they’ve helped over 40 million people access water and/or sanitation.

In The Worth of Water, Gary and Matt take us along on the journey—telling stories as they uncover insights, try out new ideas, and travel between the communities they serve and the halls of power where decisions get made. With humor and humility, they illuminate the challenges of launching a brand-new model with extremely high stakes: better health and greater prosperity for people allover the world.

The Worth of Water invites us to become a part of this effort—to match hope with resources, to empower families and communities, and to end the global water crisis for good. All the authors’ proceeds from the sale of this book will be donated to Water.org.
Gary White is the cofounder and CEO of Water.org and WaterEquity. In 1991 he launched Water Partners, now the international NGO known as Water.org. Today he leads two organizations in creating and executing market-driven solutions to the global water crisis, driving innovations in the way water and sanitation projects are delivered and financed.

Matt Damon is the cofounder of Water.org and WaterEquity, as well as an actor, a producer, and a screenwriter. In 2006 he founded H20 Africa Foundation to raise awareness about water initiatives on the continent. Matt’s active participation in the work of Water.org and WaterEquity has positioned him as one of the world’s experts on water and sanitation issues.
"A heartfelt invitation to get involved in the pursuit of clean water for everyone."
-Kirkus Reviews

"I feel lucky to have been there for that first, fateful meeting—at the Clinton Global Initiative in 2008—between a movie star with a passion for global development and a water and sanitation engineer with years of on-the-ground expertise. More than a decade later, that unlikely pair has helped transform the lives of millions of people around the world through safe water and sanitation. Matt and Gary’s vision is clear, their strategy is smart and effective, and their faith in their fellow human beings is at the heart of everything they do. This book isn't only an exciting read, it's a rewarding and important one."
-President Bill Clinton

"The Worth of Water is a powerful testament to every person’s ability to overcome their own challenges. As Gary White, Matt Damon, and the organization they lead—Water.org—have shown, a small loan can have a transformative effect for families and communities living in poverty. This book tells that story—a story of empowerment, change, and, above all, hope."
-Muhammad Yunus, Nobel Peace laureate 2006

“Healthy people, healthy businesses, healthy societies—all begin with ready access to clean water. This requires all of us, from CEOs to government officials to citizens, to do our part and work together. As the founders of Water.org, Matt Damon and Gary White have been showing the way—and now, thankfully, they’re sharing their story. This book, just like its authors, is brilliantly insightful, full of warmth and humor, and radiates optimism about our ability to create change on a global scale.”
-Indra Nooyi, former chair and CEO, PepsiCo

“White and Damon share a compelling story that hits on the most important factor missing in empowering people around the globe without access to water: giving them a chance to reinvent themselves to gain new opportunities for a higher standard of living. Reinvention is typically done by outsiders fundamentally questioning the assumption bedrock of entire industries, and with water, the notion of using microfinance to fund public services was radical... until it wasn't.”
-Vinod Khosla, founder of Khosla Ventures and cofounder of Sun Microsystems

“Water is the ultimate systems challenge. It is a unique resource that underpins all drivers of inclusive and sustainable growth, and yet we are facing a global gap of 40 percent by the end of the decade. Gary White and Matt Damon have helped develop—and prove—one of the most groundbreaking ideas in decades: that people living in poverty have the capacity to solve this crisis. The Worth of Water describes how they’ve done it—and how closing this gap requires the centrality of those who are still in need.”
-Professor Klaus Schwab, executive chairman, World Economic Forum, and cofounder, Schwab Foundation for Social Entrepreneurship

“A seamless rendering of their journey of discovery, setbacks and solution finding . . . White and Damon succeeded where others have failed, at least in part because they focused on solving the water delivery problem with the community and not by parachuting in with a solution decided from afar.”
-Associated Press