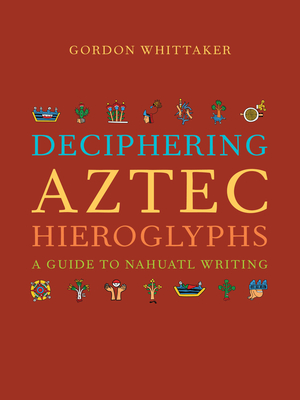 
Not Currently On Our Shelves. Usually Ships in 1-5 Days
A portal to the ancient hieroglyphic script of the Aztec Empire.

For more than three millennia the cultures of Mesoamerica flourished, yielding the first cities of the Western Hemisphere and developing writing systems that could rival those of the East in their creativity and efficiency. The Nahuatl-speaking Aztecs reigned over one of the greatest imperial civilizations the Americas had ever seen, and until now their intricate and visually stunning hieroglyphs have been overlooked in the story of writing. In this innovative volume Gordon Whittaker provides the reader with a step-by-step, illustrated guide to reading Aztec glyphs, as well as the historical and linguistic context needed to appreciate and understand this fascinating writing system. He also tells the story of how this enigmatic language has been deciphered and gives a tour through Aztec history as recorded in the richly illustrated hieroglyphic codices. This groundbreaking guide is essential reading for anyone interested in the Aztecs, hieroglyphs, or ancient languages.
Gordon Whittaker is Fiebiger Emeritus Professor of Anthropology at the University of Göttingen, where he has held joint positions in the Institute of Ethnology and the Department of Romance Philology. He has written extensively on Aztec language, writing, and civilization.