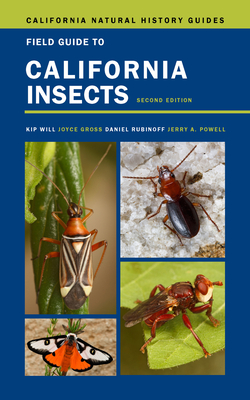 By Kip Will, Joyce Gross, Daniel Rubinoff, Jerry A. Powell


This book may be available, use the button below to request more information from our team.
Beautifully illustrated and approachable, this is the only California-specific, statewide book devoted to all groups of insects.

Completely revised for the first time in over 40 years, Field Guide to California Insects now includes over 600 insect species, each beautifully illustrated with color photographs. Engaging accounts focus on distinguishing features, remarkable aspects of biology, and geographical distribution in the state. An accessible and compact introduction to identifying, understanding, and appreciating these often unfamiliar and fascinating creatures, this guide covers insects that readers are likely to encounter in homes and natural areas, cities and suburbs, rural lands and wilderness. It also addresses exotic and invasive species and their impact on native plants and animals. Field Guide to California Insects remains the definitive portable reference and a captivating read for beginners as well as avid naturalists.

Kip Will is an entomologist, insect systematist, and former director of the Essig Museum of Entomology at the University of California, Berkeley.

Joyce Gross has been photographing California insects for 17 years and works as a computer programmer with the Berkeley Natural History Museums at the University of California, Berkeley.

Dan Rubinoff is Professor of Entomology and Director of the University of Hawaii Insect Museum. He grew up in California chasing insects and continues to work actively in the state.

Jerry A. Powell is Professor of the Graduate School and former director of the Essig Museum of Entomology at the University of California, Berkeley.
"When it comes to natural history field guides for the United States at the state level, no series ever published can even approach the California Natural History Guides for either breadth or depth of coverage."
— Well-read Naturalist

"A fantastic book—well-researched, well-written, well-illustrated, and an opportunity for you to become not a Big Game Hunter, but a Little Game Hunter."